Baker, off with Beauty, will make great British TV

If you are in the UK and own a TV, tune in to Channel 4 tonight for the first instalment of the Israeli TV series, The Beauty and the Baker. Girl meets boy - Noa, a gorgeous and famous Ashkenazi model, falls in love with Amos, the son of a Mizrahi baker. Aside  from being a hugely entertaining romantic comedy -  the show has a grittier side which will appeal to a British audience, says the Daily Telegraph. The show's writer and creator Assi Azar says British viewers will be introduced to the tension underlying Israeli society - Noa’s family is white Ashkenazi, while Amos’s is Yemeni. 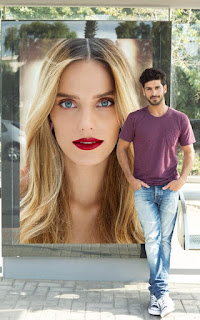 The Beauty and the Baker, has been picked for British audiences after it became the number one show in Israel when it first aired in 2014. The fact that the cast are easy on the eye must have helped too. The principal story line includes Ashkenazi model and heiress Noa Hollander fall for humble - if incredibly *ahem* hot - Sephardic baker Amos Dahari when their worlds collide on a night out in Tel Aviv and it will be the first time a Hebrew language drama has ever aired on a main terrestrial channel in the UK. However, the country certainly has some form producing compelling dramas. Homeland was originally an Israeli series, made by the same production company as this latest venture.

So why are we going to fall in love all over again with this middle eastern take on a classic? The language and the country could be seen as a mere sub–plot, for writer and creator, Assi Azar, ultimately this show is  the age-old question of whether a somebody can make it with a nobody which is at the heart of its appeal. “Most of us are like Amos, not Noa,” says 37-year-old Azar, who counts himself as straddling the divide having been born the son of a baker and gone on to become a hugely successful TV star in his home country. “It’s the story of what happens when a very rich and famous woman falls in love with a simple guy.

“I’ve been on both sides, and I would never be able to date somebody from my industry because we are all annoying, narcissistic, self-absorbed people who think everything should work according to our plans. To date another me would be impossible.”

Hi, I am a Jew living in Louisville, Kentucky, USA. I would like to give information through email regarding information of some new Syrian Jewish refugees recently and secretly accepted into our community.

The RAMBAM said, " If you tell a friend a secret, then it's not a secret any more."
--malca