Yunus Bahri, Nazi propagandist with the looks of Clark Gable

Nazi radio could have played a key part in inciting the Farhud  against the Jews of Iraq, an Israeli academic has claimed.

Addressing a Harif meeting in London, Dr Edy Cohen, who is doing post-doctoral research at Bar Ilan university, said that a broadcast from the German radio station at Zeesen four days before the outbreak of the June 1941 pogrom had incited Arab listeners to violence.

The German radio station and mast (with swastika flying) at Zeesen

The broadcast denounced the Jews as traitors collaborating with the British. "The Jews are an abomination. The biggest enemies of mankind are those who believe in the Jews," said the voice.

The voice, which opened the broadcast with its trademark,"This is Berlin! Long live the Arabs!" belonged to Yunus Bahri, an Iraqi nationalist with the looks of Clark Gable. Bahri was the first Arab to collaborate with the Nazis, he wrote in his memoirs, and had been broadcasting to the Arab world throughout the 1930s from the Fascist-controlled Radio Bari. He met Joseph Goebbels in 1931.

Hundreds of Jews were murdered in the Farhud, which rocked the long-settled Jewish community of Iraq to its foundations. According to Dr Cohen, Yunus Bahri took to the airwaves, as soon as the pogrom was over, to justify it.

The task of spreading propaganda to the Arab world was  taken over by the Grand Mufti of Jerusalem, Haj Amin al-Husseini, who fled to Berlin from Baghdad after the failure of the pro-Nazi coup  of April 1941 led by Rashid Ali Al-Ghailani. Dr Cohen found examples of print propaganda dropped from the air - replica Dollar or Sterling notes with Arabic messages attached. 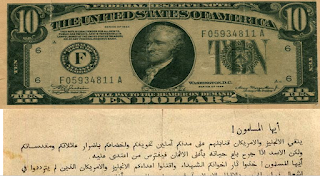 During his four years in Berlin the Mufti was handsomely rewarded by the Nazi regime - receiving $10, 000 a month to run his GrossMufti Buro. Among his lesser-known exploits was to translate a Nazi scientific journal and the works of Alfred Rosenberg into Arabic.

The Mufti, who had ambitions to preside, as Fuehrer of the Arab world, over the extermination of the Jews in Palestine and throughout the Middle East,  introduced into Islamic ideology the meme that the Jews had killed the Prophet Muhammad. "Whoever kills a Jew will go to heaven," he urged his Arabic listeners.

After the end of WWII, Yunus Bahri, like the Mufti, was never indicted for his activities. Always more of an opportunist than an ideologue, Bahri went on to work for the French, broadcasting in Arabic to North Africa. He died in Iraq in 1979.

Interesting article, but I have to doubt the authenticity of the dollar bill picture. First of all, it looks like a dollar bill was simply placed on top of an Arabic letter. Second, I don't think 10 dollar bills looked like that in the 40s.

The dollar bill was not meant to be authentic, it was a means of captivating attention. The message was most likely on the reverse side of the bill.