Arab decline began with the Jews

That now infamous handshake-that-wasn't between the Israeli and the Egyptian judokai at the Rio Olympics, when Islam El- Shehaby snubbed Ori Sasson before being sent home in disgrace, gives food for thought to Bret Stephens. Societies who hate Jews are condemned to decline and fall, he argues in his outstanding article in the Wall St Journal. (With thanks: Eliyahu) 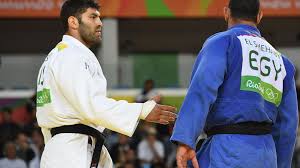 If you want the short answer for why the Arab world is sliding into the abyss, look no further than this little incident. It did itself in chiefly through its long-abiding and all-consuming hatred of Israel, and of Jews.

That’s not a point you will find in a long article about the Arab crackup by Scott Anderson in last weekend’s New York Times Magazine, where hatred of Israel is treated like sand in Arabia—a given of the landscape. Nor is it much mentioned in the wide literature about the legacy of colonialism in the Middle East, or the oil curse, governance gap, democracy deficit, youth bulge, sectarian divide, legitimacy crisis and every other explanation for Arab decline.

Yet the fact remains that over the past 70 years the Arab world got rid of its Jews, some 900,000 people, while holding on to its hatred of them. Over time the result proved fatal: a combination of lost human capital, ruinously expensive wars, misdirected ideological obsessions, and an intellectual life perverted by conspiracy theory and the perpetual search for scapegoats. The Arab world’s problems are a problem of the Arab mind, and the name for that problem is anti-Semitism.

As a historical phenomenon, this is not unique. In a 2005 essay in Commentary, historian Paul Johnson noted that wherever anti-Semitism took hold, social and political decline almost inevitably followed.

Spain expelled its Jews with the Alhambra Decree of 1492. The effect, Mr. Johnson noted, “was to deprive Spain (and its colonies) of a class already notable for the astute handling of finance.” In czarist Russia, anti-Semitic laws led to mass Jewish emigration as well as an “immense increase in administrative corruption produced by the system of restrictions.” Germany might well have won the race for an atomic bomb if Hitler hadn’t sent Albert Einstein, Leo Szilard, Enrico Fermi and Edward Teller into exile in the U.S.

These patterns were replicated in the Arab world. Contrary to myth, the cause was not the creation of the state of Israel. There were bloody anti-Jewish pogroms in Palestine in 1929, Iraq in 1941, and Lebanon in 1945. Nor is it accurate to blame Jerusalem for fueling anti-Semitism by refusing to trade land for peace. Among Egyptians, hatred of Israel barely abated after Menachem Begin relinquished the Sinai to Anwar Sadat. Among Palestinians, anti-Semitism became markedly worse during the years of the Oslo peace process.

yes and no, Selina. Southern Italy and Sicily were ruled by Spain around 1500. And it was Spain's rulers, not Italians, who decided to expel the Jews. However, some of the Jews stayed put and converted. Yet the south remained poorer and less developed than the north, as you say. But the Jewish descent of many of those southerners did not much help, and they were religiously Catholic (although some may have kept up awareness of their Jewish origins as well as some Jewish practices). The Jewish religion was banned until more recent times (probably until Italian unification in 1861) and Stephens is basically right.

By the way, the bulk of the early Ashkenazim were migrants from southern Italy and Sicily who arrived in northern France and the Rhineland starting with Charlemagne.