The Likud MK Ayoub Kara has revealed that those persons arrested for allegedly smuggling a Torah scroll out of Yemen have all been released. Arutz Sheva reports: 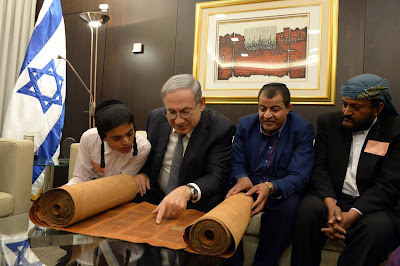 Israel's prime minister Netanyahu reads from the Torah scroll which 17 Yemenite Jews brought out with them in the last airlift to Israel in March. The scroll is claimed to have been in the custody of the Dahari family for generations

A tiny handful of Jews - numbering around 50 - opted to remain in Yemen for a variety of personal and commercial reasons, but a number of them, along with several Arabs suspected of helping smuggle the Torah scroll out of the country, were arrested in the weeks that followed. The Yemenite government has claimed that the scroll is part of Yemen's heritage, as opposed to belonging to the Jewish community, and accused them of stealing it.

All those arrested have now been released, Kara said.

The deputy minister revealed the good news at a conference of the Likud party's Netanya chapter.

During his address, Kara - a Druze Arab who maintains extensive links to Arab communities outside of Israel - also confirmed that an a Jewish Israeli citizen is currently being held prison in the Yemenite city of Amran. He said Israel is making every effort to secure his release.

It is not clear whether that prisoner is the 64-year-old Ashkelon resident who disappeared during a trip to Yemen last year.

Read article in full
Posted by bataween at Thursday, July 07, 2016

All of a sudden it's Yemenite heritage but the Jews who use it and protected it aren't Yemenite citizens and they want rid of them? Can't have it both ways, Yemen