The long Arab war against the Jews, in context 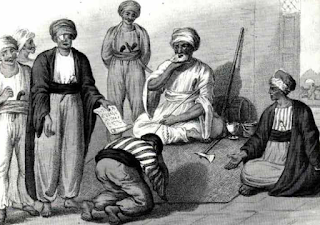 In order to understand the Long Arab War Against the Jews, we need to place it within the long history of Jewish people living under Arab and Muslim imperial rule from the seventh-century until the demise of the Ottoman Empire with the conclusion of World War I. From the time of Muhammad, until Islam ran head-first into modernity and the twentieth-century, the Jews of the Middle East were second and third-class non-citizens under the boot of Arab and Muslim imperial rule. However bad African-Americans had it in the United States under the vile rules of Jim Crow, it was never worse than Jewish people had it as"dhimmis"and what we call "dhimmitude" lasted one heck of a lot longer.

As dhimmis in Arab and Muslim lands, Jews (and Christians) could ride donkeys but horses were forbidden.

Westerners think that this is a fight between big, strong, mean Israel against the innocent, thumb-sucking "indigenous Palestinians" over land.

What the struggle actually is is an ongoing attempt by the Arab peoples to force Jews back into dhimmitude out of a Koranic religious imperative.

Read article in full
Posted by bataween at Monday, July 25, 2016

the picture at the top of the post of a Jew paying jizya is actually of the court of Ahmad Jazzar Pasha, governor of the Akko [Acre] district. His Jewish advisor Hayim Farhi is standing at the side with his nose cut off and what appears to be a bandage over it. Farhi's nose was cut off at the order of Jazzar Pasha when he was displeased with him. So even a Jew who held a high position could still be humiliated by a Muslim overlord.

Lumish makes a good point that we all should make over and over. Present day Arab-Jewish relations cannot be honestly understood without knowledge of the history of Jews as dhimmis. Moreover, it is right to elaborate on the religious grounds in Islam for oppressing Jews, Christians and other non-Muslims. Prof Moshe Sharon argues that the Muslims actually hate Jews more than Christians because of events in early Muslim history, according to Islamic tradition.