The diaspora's blindspot for the (Mizrahi) poor

When it comes to raising money for Israeli causes, the Jewish diaspora routinely finds Jews from Africa less interesting than African refugees, argues the iconoclastic Seth Frantzman in the Jerusalem Post. 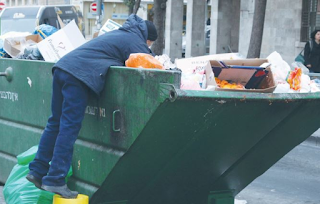 A report on poverty in Israel found that 12 percent of the Israeli population had to beg for food (Photo: Marc Sellem)

A while ago I pitched an op-ed to an American Jewish publication. The Friends of the IDF had recently raised $31 million in California. I wanted to write that it would be worthwhile for contributors to give the same amount of money to support educational initiatives for IDF soldiers after the army. Israel has a conscript army and while it may be important that average Israelis serve, it is more important that they can get into college afterwards and have a financially successful future for their families.

Why wasn’t it an interesting topic? Because it didn’t fit the narrative that focuses primarily on Israel as either a place of conflict or a place to negotiate Diaspora Jewish identities. Many Israelis live in poverty, but while poverty may be a Jewish concern abroad, wrapped up in such concepts as “tikkun olam,” it isn’t a “sexy” issue. African refugees in Israel are interesting, Jews from Africa are less interesting.

That is the blind spot of well-meaning, left-leaning Jewish Americans who are critical of Israel’s policies. A recent visit by Jewish activists to Hebron underpinned this. They focused on social justice for Palestinians and token “civil rights” protests. One activist wrote of the “beautiful act of partnership, we, Jews and Palestinians, came together through trust and understanding and made huge strides in creating the first cinema that will stand in Hebron since the 1930s.” Aiding Palestinians to build a cinema is a worthy goal, but there is a disconnect here. Social justice and the fight against racism should not end at the Green Line, but for many left-leaning activists they do.

Read article in full
Posted by bataween at Tuesday, July 26, 2016