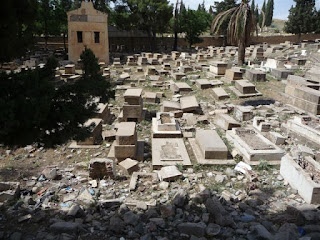 Many graves no longer have headstones, resulting in their desecration if the exhumations go ahead


More than 1,000 people have signed a petition against the French government’s plan to move dozens of graves in Algeria, including Jewish ones, to save on maintenance expenses*. JTA reports:

The petition, launched earlier this month by Orthodox Jews from France living in Jerusalem, follows a decision made in May and announced last month by the French government to move graves from 31 cemeteries.

The cemeteries in question are known in Algeria as “European cemeteries” because they belonged to France when Algeria was still part of the French Republic, before it became independent in 1962. All the graves that are earmarked to be moved are of French citizens whose families mostly left Algeria before 1962.

With upkeep expenses mounting amid frequent vandalism and garbage dumping at the cemeteries, the French and Algerian governments decided to move European cemeteries into an ossuary following a six-month delay designed to allow family members to organize the transportation for the remains of ancestors to France.

Halachah, or Jewish law, allows disturbing graves almost exclusively in situations where doing so can save lives or prevent disrespect of the dead and desecration. But in this case, “the main reason is to limit the expenses,” the organizers of the petition wrote.

They also said the plan will result in the desecration of more than 1,000 Jewish graves that do not have headstones. Many headstones were removed over the decades from European cemeteries.