Muslim Circassians who saved Jews during the Holocaust will be among those honoured in a new memorial at the Arab-Jewish village of Neve Shalom, Haaretz reports. Yad Vashem, the national Holocaust memorial,  already honours 'Righteous Gentiles': to meet its strict criteria, these Righteous must have themselves risked their lives to rescue others. (With thanks: Lily) 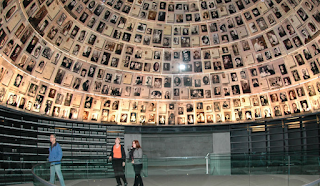 NEVE SHALOM – A makeshift sign tacked onto an olive tree is for now the only clue to the grand plan in store for this stretch of woods overlooking the Ayalon valley in central Israel. “Honoring the Circassians who saved the lives of Jews,” it reads.

If all goes as planned, this several-acres-large plot will become the site of an ambitious memorial project commemorating courageous individuals around the world who, during periods of war, ethnic cleansing and genocide, risked their lives to save others. Alongside the tree commemorating the tiny Muslim Circassian village in the Caucasus that saved 32 Jewish children during the Holocaust, there will be others — many others, in fact.