First visit by Egyptian official to Israel in 10 years 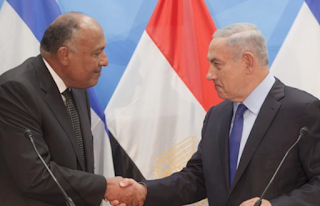 Perhaps it is too much to ask, but compensation due to Egyptian Jews or the future of their heritage did not figure in the first visit by an Egyptian official to Jerusalem since 1967. Al-Jazeera reports:
Egypt's Foreign Minister Sameh Shoukry has met Israeli Prime Minister Benjamin Netanyahu in Jerusalem, the first such visit in nearly a decade. Speaking at a news conference on Sunday alongside Netanyahu, Shoukry called for renewed peace talks between Israeli and Palestinian officials, and warned of the "constant deterioration" of the situation on the ground since the last round of negotiations between the two sides collapsed in April 2014.

"My visit to Israel today is a continuation of Egypt's long-standing sense of responsibility towards peace for itself and all the peoples of the region, particularly the Palestinian and Israeli peoples, who have suffered many decades due to the perpetuation of the conflict between them," Shoukry, the first Egyptian official to visit Israel since 2007, said. "The plight of the Palestinian people becomes more arduous every day," he added. "The dream of peace and security moves further out of the Israeli people's reach as long as the conflict continues."