Hopeful signs from Egypt: Al-Ahram reports that the Egyptian president has called for purging radical Islamism from religious discourse. And for the second year running, reports Elder of Ziyon, the annual Ramadan TV soap has depicted Jews in a positive light. 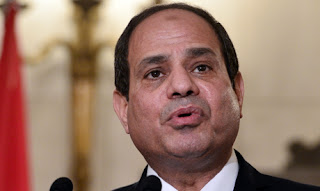 "The Muslim world is going through a dangerous turning point and is facing unprecedented challenges targeting its existence and people, [and facing this] requires concerted efforts from all of us while putting all differences aside," El-Sisi said during a speech Wednesday.

El-Sisi warned against those exploiting sectarian or ethnic differences to cause division in the Muslim world.

The president made his remarks during a nationally televised address commemorating the anniversary of Laylat Al-Kadr (Night of Destiny), when Muslims believe the first verses of the Quran were revealed to the Prophet Mohammed.

The president also urged scholars from Egypt's Al-Azhar, the highest seat of Sunni Muslim learning, to rethink religious discourse and "purge it of flaws" that negatively affect Islam.

El-Sisi has more than once blamed outdated "religious discourse" for holding back Egypt and called for "a religious revolution" in Islam, saying that radicalized thinking has become a source of destruction for the rest of the world.

Read article in full
Posted by bataween at Friday, July 01, 2016

Islam can no more be "purged of its extremism" than a camel's D.N.A can be purged of its propensity to generate humps.Indeed,poorold Misr may well be the ultimate Muslim basket case,in its present state of accelerating downfall into the abyss. But why go through the same dismal details for the thousandth & one time? It's better to just plan for the demographic containment of it...unlike the Syrian case.For it will make the Syrian/Mesopotamian maelstrom {i.e. the former "Iraq"} look like a communal hookah inhalation.
Major changes in Egypt's borders with abutting nations,almost insatiable demands for food,and other life-sustaining commodities from productive nations,and the imminent,typically Islamic threat of extermination which hangs over Egypt's aboriginal Coptic community,will all demand immediate massive intervention: Like it or not !
And, would it be inappropriate to mention that, based on the thwarted outcome of her 2011 elections,the overwhelming majority of Egypt's population back the very forces that are the historic causes of that downfall.

Talk to me after you absorb enough "Palestinian refugees" equal to the hundreds of thousands of Jews you expelled and stole all their possessions.

Anon, forgive my pun but it seems like you are saying that Misr is going to be more and more miserable. I'm not sure of that. If you have the top guy in the country openly saying these things in Arabic, then there may be hope. But it won't be easy. And by the way, bear in mind that Obama and his government wanted the Muslim Brotherhood to take over Egypt fully. The US foreign policy establishment presented the MB as a democratic force blah blah blah. So if as-Sisi wants to change the Islamic mentality of most Egyptians, he is going to have opposition from abroad too, from the USA and maybe the UK and/or the EU and other countries, not to mention some of his Arab and/or Muslim brethren.