This week, Christians United for Israel hold their summit in Washington. The launch  of their 'Mizrahi Project' is expected to be a talking point:  it is a real breakthrough in the campaign for justice for Jewish refugees from Arab lands and Iran. For the first time, three million Evangelical Christians who support Israel will be exposed to the story of the Mizrahi Jews told through a series of video clips and recorded testimonies. Leading the Mizrahi Project is Pastor Dumisani Washington, who has been working closely with the advocacy group JIMENA. He spoke to Karmel Melamed of Jewish Journal: 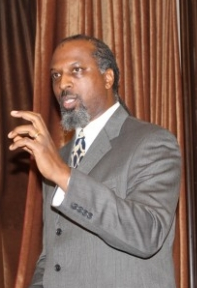 KM: Can you please shed light on why you think it is important for young Christian Zionists in your organization to know more about the plight of 850,000 Jews who fled or were forced out of the Arab lands and Iran during the 20th century?

Like much of the world, most Christians are completely unaware of the story of the Mizrahi Jews.  They are somewhat aware of the Holocaust, but do not know that more than half of Israel’s Jewish population came from North Africa (and the Middle East - ed), and the It reminds Christians that the God of the bible is indeed gathering the “dispersed of Judah from the four corners of the earth,” by challenging them to think beyond the Jews of Europe.  It is also a reminder that Jewish communities in what are now Arab or Muslim countries predated Islam and Christianity by more than 2,000 years. Finally, knowledge of the Mizrahi Jews gives a more accurate account of the Arab-Israeli conflict, making an even stronger case for the need for a Jewish state.  For example, knowing that the Jews of ancient Babylon or Iraq were persecuted and expelled during the Farhouds of the early 1940’s is evidence that the current “conflict” is not truly about territory.  It’s about hatred for the Jewish people.

KM: With all due respect, the Ashkenazi Jewish community in the U.S. has never shown an interest in hearing about the story of the forced Jewish exile from the Arab lands and Iran. As you indicated, some do not even know about it. Why do you believe Christians will have interest in this story?

Not only do I believe Christians will be interested in the Mizrahi narrative, CUFI is already seeing the extent of the interest.  In January we shared this story with CUFI’s top college advocates during our Student Advocacy Leadership Training Conference.  There were also many pastors and CUFI staff in attendance.  We connected the Mizrahi Jews with the biblical narrative, and showed 19th century pictures of the Jews of Morocco, Algeria, Egypt, Syria, Tunisia, Iraq, Iran, Libya, Lebanon, and Yemen.  The conference attendees were inspired, empowered, and strengthened in their spiritual faith.   A few pastors asked that the presentation be made at their churches.  Many wanted even more information.  The stage is set.

KM: I understand you’ve mentioned to CUFI members and even to Christians who had support for the Palestinians about this issue of the forced Jewish exile from the Arab lands and Iran in your speeches here and there. What have been their initial reactions to learning about these Mizrahi Jews and their forced exile during the 20th century?

As I mentioned, our ‘CUFI On Campus’ leaders and pastors were very intrigued by the initial presentation we made at our annual student conference in January.  Since that time I’ve had the opportunity to share the Mizrahi narrative in our introductory events which are Pastors briefings, and the reaction has been consistently positive.  Also, I have begun including the information in campus lectures – lectures that have both pro-Israel and anti-Israel attendees.  Even Israel’s detractors are taken aback by the unfamiliar story of over 850,000 Jews expelled from Arab and or Muslim lands.  I strongly believe that, as this topic becomes a staple in Israel advocacy on college campuses, it will help our students make an even stronger case against the de-legitimization of Israel – especially during BDS campaigns.

KM: Can you please share why you have outreached to the L.A. Iranian Jewish community and other Mizrahi communities to tell their story about their forced exile and escape? What impact do you believe it will have if Christian Zionists here it directly from those whose families experienced this exile?

I’m a believer that one who has actually experienced something can make the most compelling case for it.  For The ‘Mizrahi Project’ that will include both the first generation who fled to Israel and other places, as well as their children. I have personally interviewed many members of the Mizrahi community both in Israel and the United States and have found them to be among the most passionate and articulate supporters of the Jewish State.  The older generation has vivid memories of what it was to live in places like Egypt and Turkey.  One of my dear friends is a Jew of Egyptian and Iraqi descent who remembers being stateless for years while waiting for immigration to the U.S.  Her mother’s family was kicked out of Iraq with nothing more than what they could carry in a briefcase.  Her father left Egypt when the Arabic version of Hitler’s “Mein Kampf” became a best-seller.

Pastor Washington's video (in conjunction with Prager University) "Why are there PalestinianRefugees?" has had over a million views

Email ThisBlogThis!Share to TwitterShare to FacebookShare to Pinterest
Labels: Iranian Jews in US, Jewish refugees/ US campaign

It's a sorry state of affairs when it takes non-Jews to raise awareness of historical and current harassment and persecution of Jews in MENA.