The state of Maharashtra is the second in India to confer official minority status on the Jewish community.  This will help preserve the community's legacy and protect its synagogues and property. Sifra Lentin reports for F. India in the second of a two-part series : 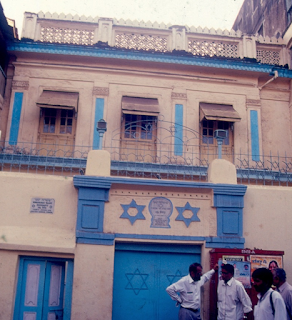 For generations of Indian school students, especially those from the ICSE stream, Indian English poet, Nissim Ezekiel’s poem ‘Night of the Scorpion’ will always be fondly remembered. Not only is the poem simply written but its multiple themes of good versus evil, superstition versus rationality, and love conquers all ( “My mother only said/Thank God the scorpion picked on me/And spared my children”) were not just easy to learn but easy to score marks on.

What escapes most readers though is the vivid imagery of village life that Ezekiel conjures (“I remember the night my mother/ was stung by a scorpion. Ten hours/of steady rain had driven him to crawl/beneath a sack of rice.”), drawn from Ezekiel’s childhood memories and his community’s roots in the villages of the Konkan coast.

Nissim Ezekiel (b. 1924-d. 2004) belonged to the largest Indian Jewish community on the subcontinent – the Bene Israel (children of Israel) – who are better known in the villages of Raigad district (which includes the north Konkan coast) as shanwar tellis or Saturday oil-pressers. This is a reference to this community’s traditional village occupation as oil pressers who abstained from work on Saturday – the Jewish sabbath.

The Bene Israel Jews of Maharashtra (part of erstwhile Bombay State) will be the major beneficiaries of the Maharashtra state government’s announcement last week notifying Indian Jews as a minority community. Although community numbers have dropped from their peak in the 1951 census (Bombay state 20,135 versus all India 26, 512) to the last census (2011) figures of 2466 (Maharashtra state) versus 4650 all India, the fact remains that Maharashtra is still home to 53 percent of Indian Jews today.