Another Jew emerges in Pakistan

Pakistan does not recognise Judaism and there were no known Jews living in Pakistan until Fishel Benkhald embarked on the struggle to self-identify. Now another young Jew, Aryeh Ben Samuel, has decided to declare himself as a Jew, despite all the risks. Here is his story. (With thanks: Wayne) 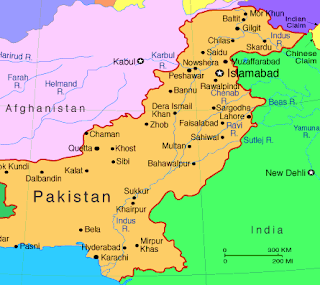 "Shalom to the whole world from Pakistan,

I am an 18 year- old Pakistani boy. My grandparents crossed the Indian border in 1948. They used to live in Hyderabad, South India. During the migration process, my grandfather told me that those days were the toughest days he had ever seen in his life: there was blood all the way, kidnappings, rapes.

Extremists also robbed my grandparents ; when they forced my grandparents to accept Islam and leave Judaism, my grandparents refused, then they raped my grand mother, so I was told. When they got into Pakistan at the Wagah border with Lahore, they were processed so as to obtain migration documents. When it came to religion, the migration registrar refused to provide documents for my  ancestral family. His words were, so as I was told: " we hate Jews, because of non-Muslims we had to sacrifice our lives to obtain a country, and you people will ruin it, and make our land unholy."

My ancestral family was forced to accept Islam once again, but they now decided to pretend rather than accept. From that very moment we were registered here under Muslim names.

A few days ago when I became legally an adult of 18 years of age, I filed an application to the registration department NADRA for my ID card. I also mentioned to them that I want to make my religion Judaism again. The registration officer lady, replied with an angry face, " once the religion is Islam it can never be changed as per  the policy laid down by the Interior Ministry." Thrice I received same reply,  even though I showed them some documents which we obtained after migration, documents which still show that we are Jews.

Even though we are pretending to be Muslim, we have never forget to observe shabbat, and we do pray the shema, read Tanach (Torah) Tehilim (psalms).

Thanks for posting this. I wonder how many more Jewish families are living there to this day. Shalom!

Very sad story,wish your family would have been in Karachi when all jews migrated to Israel.
I suggest keep yor identity secret otherwise your life will be in danger. somehow go to India and meet Israeli counsel.

G-d Bless. Thank you for sharing your story.

I'm glad that you kept your religious identity intact. I wish Pakistan would become a religiously diverse country. Be safe.

Very sad to learn about your family's ordeal. Its better you should move out from Pakistan to safer place.

Pakistan does not want to become "a religiously diverse country". In fact, after persecuting the Hindus who had stayed on, Pakistan began persecuting or excluding Muslim minority sects. Consider the Ahmadiyya. This was a rather modernizing Muslim sect which started up in India in the 19th century, as far as I know. They were proud Muslims although modernizers. The Ahmadiyya were among the most enthusiastic adherents of the Pakistan idea [that is, that the Indian Muslims should have a separate state from the Hindu majority].

So what happened to the Ahmadiyya as time went on? They were officially declared to NOT be Muslims. The state decided that they were NOT Muslims. So Pakistan narrowed the definition of what a Muslim is. Pakistan hardly seems ready to give real equality or even physical protection to non-Muslims.

I always wondered where are the Pakistani jews, as I knew that there were nearly 2000 Jews in Pakistan. Now I know what happened with them. It is a very sad story you told that how your family went through all this pain and you still struggling for your identity. According to the founding ideology of Pakistan, every body must be free to practice one's religion without any fear. What happened with your family and other Jews people is utterly utterly wrong. Pakistani govt. should officially apologies to pakistan Jews citizens, accept their identity, protect them and provide them with all the support they want, because they are Pakistanis.
Few people acts does not represent all the individuals of any country. I am a muslim and I live in Karachi, Pakistan. I have Christians, Hindus, Ahmadis, Zoroastrians friends. Karachi is a diverse international city with openness. Yes there are problems as well due to many factors but common man has nothing to do with any wrong doing.
I stand with Fishel and you and any other Jew living in Pakistan.
Stay safe, stay blessed

So many Jewish families are there scattered around inner sindh especially in Hyderabad once rich but nonow live in dire conditions as Muslim but never give up our faith. I'm one of them but fortunate to leave to Pakistan 20 years ago now living in a South East Asian country and looking for my lost blood relatives of Marathi speaking Bene Israel.