Using the Jews as an instrument of foreign policy is not a new strategy for Morocco - it bolsters the legitimacy of the royal family in the eyes of the West. But rarely has the Moroccan media been so bold as to promote  a Jewish 'protest' in favour of Morocco's claim to the occupation of western Sahara, as it did last month. If reports are correct, 500 Jews - or a quarter of the country's entire community - would have turned up to sing a patriotic song about the contested area at Mazagan's Mimouna celebration.  The Forward reports: 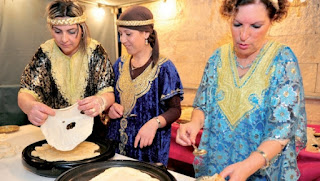 Preparing for the Mimouna (photo: DR)

The April 30 protest in Mazagan, 120 miles southwest of Rabat, was part of Mimouna, a traditional North African Jewish celebration held the day after Passover, and it featured group singing of Laayouna Ainiya, a Moroccan patriotic song from the 1970s about the contested area, the Assabah daily reported last week.

Last month, Ban angered Moroccan authorities when he said  they were “occupying” the Western Sahara after they ordered the expulsion of 80 staffers from the United Nations Mission for the Referendum in Western Sahara .
The U.N. General Assembly  endorsed  that view in 1979, declaring Morocco an occupying force in the former Spanish colony and affirming the “inalienable right of the people of Western Sahara” to independence. But Morocco, which in recent years has come under increasing pressure to allow self-rule in the area, claims it as part of its territory.

Sam Ben Chetrit, president of the World Federation of Moroccan Jewry, told JTA on Friday that while he is not familiar with the details of the gathering at Mazagan, “it is true that Moroccan Jewry in the kingdom and outside stand united in defense of Morocco’s claim on Sahara, and against those who try to portray Morocco as a foreign occupier in its own land.”

Ben Chetrit, who lives in Israel but travels to Morocco frequently, said this support is part “of the Jewish People’s gratitude to Morocco’s royal house, government and people, who have done more than any other nation in the Middle East and many nations elsewhere to preserve Jewish heritage and protect Jewish citizens.”

Coexistence films make great PR for Morocco
Posted by bataween at Saturday, May 14, 2016

1. "The Mazagan" (not Mazagan which used to be the beme of the town)is a luxury Resort Hotel where Jews come from various parts of the world to spend the holiday of Passover. They arrive a few hours before the seder and leave at the close of the Mimouna.

2. They close the festivities with music performed by a Moroccan local band. The band played the song for them.

So, sorry to disappoint, but there was no government influence, no PR, and no conspiracy.

Do they agree --as I do-- that the Sahara is Moroccan? Of course they do. But not for the reasons stated here.

I live in Israel , I am no one's "instrument", and I'll state it clearly and unequivocally: the Western Sahara is part of Morocco. Only an ignorant Jew would say otherwise.

The Sahraouis who massacred Jews in one of the worst pogroms of the twentieth century did it in the name of their "moroccan patriotism" against French colonialism. If they were Moroccan then, then they are Moroccan now.

Granted, the singing may have been spontaneous, but there was a deliberate attempt to publicise this in the Moroccan media. The Jews - the Moroccan government's bridge to the US and the West - lend legitimacy to Morocco's claim to western Sahara.