Here's a story that's a few weeks old now, and we hope it had a happy ending: Sandy Rashty of the Jewish Chronicle reports on the arrest of four people in Yemen in the wake of the highly-publicised airlift of 17 Jews to Israel - and the 'smuggling' of a Torah scroll out of Yemen - and the efforts of businessman Moti Kahana to get them released before Passover. 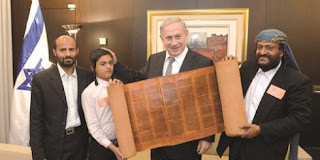 When almost 20 Yemeni Jews fled the town of Raydah in a covert operation, few people thought of the handful of members of the 3,000 year-old Jewish community who had been left behind in the nearby city of Sana'a.
As the figurehead of the exodus, Rabbi Saliman Dahari - who brought an 800-year-old Torah with him to Israel - posed for pictures with Benjamin Netanyahu last month, he was not to know that the widely-circulated image would have serious consequences for the Sana'a Jews.

Yemeni authorities were incensed by images of the Israeli prime minister holding what they considered to be an artefact belonging to their country.
To their mind the Sefer Torah had been illegally smuggled out of Yemen.
The JC can reveal that the consequences of the image being seen around the world were catastrophic.

Israel's Immigration and Absorption Minister Ze'ev Elkin said the media reports endangered lives of those who remained in the country.
He said: "One of the reasons that there are problems for the Jews still in Yemen is because so many people spoke about it. It's better to deal with these kinds of issues quietly."

Just days after media outlets told the story of the rescue of the 17 Yemeni Jews, armed forces closed in on the remaining members of the community living in the city riddled with civil unrest and controlled by Houthi rebels.

Soldiers banged on the door of an Orthodox teacher in his 30s. They arrested him on suspicion of helping "smuggle" the Torah scroll out of Yemen.
A second Jewish civilian, who made aliyah 10 years ago but later returned to Yemen, was arrested for being a "Mossad Zionist spy" last week. On Wednesday, his mother was also taken into custody. A Muslim airport worker was also arrested for allegedly failing to seize Rabbi Dahari's bag at checkout.

Israeli American Moti Kahana, founder of NGO Amaliah, who famously helped rescue the last Jews of Aleppo in Syria last year, is one many activists said to be negotiating with Houthi representatives to free all four detainees, who are believed to have been tortured.

On Wednesday, Mr Kahana said he hoped they would be home in time for tonight's Seder. He said: "We are talking to the Yemenis. We have put two offers on the table to get them out of jail. We hope they will be home for Pesach.
"The rest of the community is very scared. They are being told by authorities that if anyone leaves, especially to Israel, the rest are going to jail."