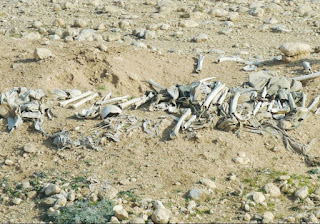 A group of Yazidi and Kurdish representatives visited the Holocaust memorial at Yad Vashem in Jerusalem this week. They were attending a conference dedicated to providing a platform for persecuted minorities. The Jerusalem Post reports:

The black-and-white images at one display at Yad Vashem’s Holocaust museum in Jerusalem show women survivors of the Volary death march who married and raised families.

The guide emphasized the desire to continue living that survivors had in the wake of the Nazi genocide, even as they lived crammed into displaced persons’ camps after the war.

For the Yazidi and Kurdish delegation touring the museum these were stories that rang true back home in Iraqi Kurdistan where some 300,000 Yazidis have become refugees from persecution by Islamic State.

For the six visitors, the traumatic experience on Sunday of walking through the cement-shrouded museum seeing displays of Nazi brutality was jarring. The group had come to take part in a multiday conference this week at the capital’s Mishkenot Sha’ananim hosted by the Spring of Hope Foundation and dedicated to providing a platform for the voices of persecuted religious and ethnic minorities. The delegation included Sherzad Mamsani, the director of Jewish affairs for the Kurdistan Regional Government, Saeed Khudeda Alo, a lecturer at the University of Duhok, and Khaleel al-Dakhi, a Yazidi lawyer and activist who has helped rescue people from ISIS slavery.