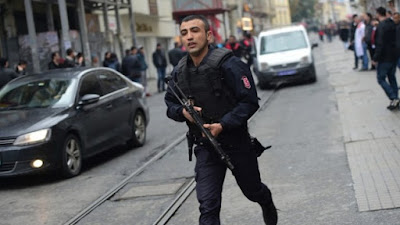 A Turkish policeman runs after an explosion on the pedestrian Istiklal avenue in Istanbul on 19 March 2016. (AFP / Bulent KILIC)

News of a imminent attack on Istanbul's Jewish children by cells of Islamic State (Daesh) comes as no surprise to Jews in the diaspora, who have long had to protect their synagogues and institutions from terrorist threats. What is new, however, is that the story was broken by Sam Kylie at Sky News, thus making it newsworthy to a mainstream mass audience. Times of Israel reports:

Islamic State terrorists are planning an imminent attack on Jewish kindergartens, schools and youth centers in Turkey, according to a report by Britain-based Sky News Monday.

The report came hours after Jerusalem issued an alert for all Israeli citizens to leave Turkey as soon as possible, citing an Islamic State threat, and nine days after three Israelis were killed in a bombing in Istanbul.

According to Sky News, citing an “intelligence source,” terrorists are plotting to attack a synagogue which also doubles as a school and community center in the Beyoglu neighborhood of Istanbul.

The source said the threat was imminent and could happen at any moment.
“This is a more than credible threat. This is an active plot,” the source said. “We don’t know when it’s scheduled for. It could be in the next 24 hours or next few days.”

Read article in full
Posted by bataween at Tuesday, March 29, 2016

Erdogan is pretty bad. Just recall that Obama was his good friend, his "BFF" just a few years ago. Erdogan was helping the ISIL group before they started bombing Turkey. Obama approved when erdung helped send the Mavi Marmara toward Gaza as part of the pro-Hamas flotilla. The minions of erdung on the mavi marmara were looking to make a provocation to embarass Israel in its legal and just blockade of certain products going into Gaza that could be used for war purposes. So both obama and erdung are partners against Israel.