Turkey has just commemorated the Struma disaster, a tragic episode 74 years ago when a boatload of Holocaust survivors was sunk, violating Turkey's wartime neutrality. It is the second time the victims have been officially remembered and is seemingly part of Turkey's recent charm offensive towards the Jewish community and Israel. But anti-Semitism in Turkey has reached frightening levels of  intensity, writes Burak Bekdil of the Gatestone Institute. 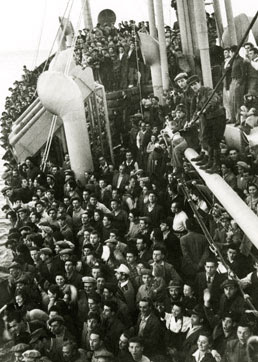 Until this year Turkey, one of the main culprits, had only once commemorated the victims. This year, official Turkey decided, should be the second time. A wreath and carnations were hurled at the sea in the shadow of the horrible event that took place decades ago.

At the commemoration ceremony at Sarayburnu harbor on the Bosporus were the head of Turkey's Jewish community, Ishak Ibrahimzadeh, Chief Rabbi Isak Haleva and Istanbul's governor, Vasip Sahin. In his speech, Sahin said: "We observe that the necessary lessons were not drawn from such tragedies." He was right, at least from a Turkish point of view.

When it comes to diplomatic conflict between Turkey and Israel or Turkish anti-Semitism, there is always an unusual optimism in the official language chosen by Israeli officials or Jewish community leaders.

For instance, Ibrahimzadeh praised "recent steps by the Turkish state to mend history with the Jewish community." Echoing the same optimism, chairman Stephen Greenberg and executive vice chairman Malcolm Hoenlein of the Conference of Presidents of Major American Jewish Organizations, assured that Turkey's small (less than 17,000-strong) Jewish community feels "safe and secure" despite being placed in the middle of a political feud between Turkey and Israel -- sparked first in 2009 by then Turkish Prime Minister Recep Tayyip Erdogan's clash with former Israeli President Shimon Peres at a World Economic Forum meeting in Davos, Switzerland.

Such optimism in official narratives is normal, especially because Ankara and Jerusalem have been privately negotiating a deal to end their hostilities and normalize their diplomatic relations. Non-constructive, let alone explosive, speeches from any state or non-state actor will not help diplomats from either side in their efforts to reconcile. All the same, facts on the ground are a little bit different than the rosy picture.

If Turkish Jews are "safe and secure" in Turkey, why do they feel compelled to protect their schools and synagogues with heavy security? Why do most synagogues in Istanbul look almost like a U.S. embassy in Baghdad or Islamabad?

On Jan. 20, 2016, a Turkish synagogue in an old Jewish neighborhood in Istanbul was vandalized with anti-Semitic graffiti days after holding its first prayer service in 65 years. Vandals painted the external walls of the Istipol Synagogue with the script: "Terrorist Israel, there is Allah."

"Writing anti-Israel speech on the wall [outside] of a synagogue is an act of anti-Semitism," said Ivo Molinas, editor-in-chief of Turkish Jewish newspaper, Şalom. "Widespread anti-Semitism in Turkey gets in the way of celebrating the richness of cultural diversity in this country.

The Struma was sunk by a torpedo fired from a Soviet submarine. It is not clear what motivated the Soviets to do this. There were standing orders to the Soviet Navy in the Black Sea to sink ships that might be hostile but the Struma hardly qualified to be put in that category. It is more likely that the sinking was carried out by the Soviets at the request of the British authorities.

Here's a bit more about what happpened: The Turks towed the ship into the Black Sea where the ship was allowed to drift helplessly. After it sank no effort was made to rescue the survivors. Only one man survived, David Stoliar, who died in 2014. He was detained for many weeks after he came ashore.So the Turks could be said to be somewhat complicit in the tragedy.