A second young Jew in the space of a week  has been killed in Yemen: Jews are being forced to fight for the Houthis against Saudi Arabian forces. Blogger Elder of Ziyon quotes the Yemeni media:

On Friday, Jewish 17-year old Aaron Albouha was killed in fighting with the Houthis against Saudi Arabian forces in Yemen. He was killed in the southern region of Najran.

Albouha's family, which had managed to escape Yemen for the US, were shocked to learn of his death, Arab media is reporting. 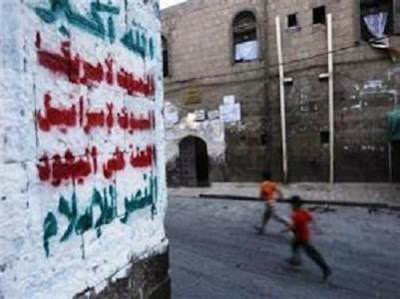 According to reports, the Houthis are forcing the few remaining Jews in Yemen, even children, to fight with them  - and they are placing them on the front lines as cannon fodder.

Albouha is not the first Jew to be killed while being forced to fight for the Houthis. Jacob Ahamim was killed about a week ago at the Yemen/Saudi Arabia border.

The Iranian-backed Houthi slogan and logo says "God is Great, Death to America, Death to Israel, Damn the Jews, Power to Islam."