A last group of Jews living in Yemen was brought to Israel in a secret mission in recent days, the Jewish Agency announced. Clandestine activity of the Jewish Agency culminated in the aliya of the 19 Jews, fourteen from the town of Raydah and a family of five from the capital Sana'a. This leaves 50 Jews in Yemen, most of them  in a guarded compound in Sana'a. The Jerusalem Post reports: 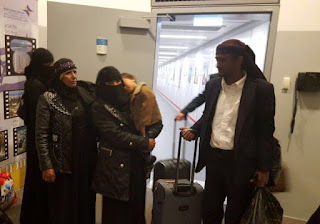 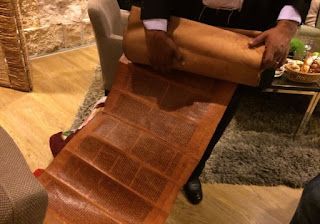 According to Channel 2, the US State Department was involved in the mission and helped coordinate the complex transfer of the Jews after the group faced persecution on its way to Israel.

Among the new immigrants was Rabbi Saliman Dahari who arrived with his parents and his wife and met his children upon arrival at the absorption center in Israel. The rabbi brought with him a Torah scroll that is 500-600-years-old.

One of the new arrivals on Monday was the son of  Aharon Zindani, who was murdered in an anti-Semitic attack in 2012. Also in 2012, a young Jewish woman was abducted, forced to convert to Islam, and forcibly wed to a Muslim man. The Jewish Agency said that as Yemen has descended into civil war and the humanitarian situation in the country has worsened, the Jewish community has found itself increasingly imperiled.

More than 51,000 Yemenite Jews have immigrated to Israel since the country’s establishment in 1948. In 1949, Israel organized their mass transfer to the newly-established state in Operation Magic Carpet.

The Jewish Agency noted that some fifty Jews remain in Yemen, including approximately forty in Sanaa, where they live in a closed compound adjacent to the US embassy and enjoy the protection of Yemeni authorities. These last Jews have chosen to remain in the country without Jewish communal or organizational infrastructure, the Jewish Agency said.

Chairman of the Jewish Agency for Israel Natan Sharansky said hailed the mission as a "significant moment in the history of Israel and of aliya."

MFA newsletter (with thanks: Imre)

One young Yemenite student announced the news on his Facebook page:

" I have waited ten long years to say that my parents, grandparents and the rest of my family is finally out of Yemen. I just got a phone call from the Jewish Agency confirming that they're on their way to Israel."

The news was announced yesterday by Manny Dahari, a student in the US.

The family are from Raida in the north of the country, driven out by the civil war  and the rise in antisemitism.

After three failed attempts to leave Yemen in the space of two years, Manny Dahari's's five young siblings arrived in Israel in October from the war-torn country.

Entry 1:
Finally they made it, but still there are 50 Jews still remaining in Yemen, that I do not understand. I still do not grasp the reasons why they have waited this long to exit that damned cursed country. Jews have made their lives everywhere, without essentially large earthen buildings edifices, huge coliseums and monumental places of government and/or worship. Even the beautiful red desert landscapes of Yemen with their springing oasis, ancient water wells and the human made citadels like Sannaa are not worth the lives of Jews. What sustains Jewish people and kept them alive as the world’s most perennial surviving group (regardless of their level of religiosity) is the word (the story) - the written word more precisely (L’ecriture). Although I am glad these remnant Yemeni Jews have left, still their exodus from the war torn country is only a premonition of things to come.
I do not know about you, but some strange thoughts about recent events have been creeping up my head. I am unable to undo them. I am either getting old or maybe I am getting religious or perhaps there is no evasion of the dire prediction of the prophet Ezekiel’s destructive bad boys of Gog and Magog. It seems that wherever there are strifes, destruction and death in the world nowadays, these same places of horror right now were once bustling with Jewish presence sustained with economic and political stability and growing intellectual life (regardless of economic struggle to live and prosper). Is there a premonition that the dues of the past wrongs perpetuated the Jews need to be paid? Do some of you sometimes (I repeat sometimes, not all the time) feel that justice or history is now on the side of the once persecuted, demeaned as well as those innocent who were murdered. Let me expand and explain.

Let’s take examples of current hot spots of destruction and death.
First, Ukraine. The birth place of Hasidism and the great centers of learning of Ashkenazi Judaism. The Jews have all gone, reproached for simply being Jews by the modern states of Russia and Germany. The Yehudim were almost entirely annihilated. Now, it seems to me that the souls of all those gassed, burned, and executed and tortured in the spacious green fields of Western Ukraine and Eastern Poland are now on the move reminding humanity of what happened. It seems that nobody listen until something evil happens. Let it happen. It being war, destruction and death.

Entry 2.
Second, Iraq. The birth place of the codified Mishnah and the Babylonian Talmud. The Farhud’s victims and the countless number of displaced inhabitants of Jewish faith that made the modern state of Iraq prosper are now saying: “We, the survivors of the Farhud, you kicked us out of the land. What do you have to show for yourself now? “ The Cain syndrome curse is in full swing. Muslim on Muslim violence and death. Destructive power of the chaos and irrationality; all for a type of sectarianism of dubious religious reason (Shia vs. Sunni) which is mostly grounded on 14 centuries of discord about political succession not religious legitimacy. But the protagonists cannot see the difference. I should add Syria here too as an example, but perhaps I should have called it Mesopotamia.

Third, Yemen. So much for the recent archeological findings of the Jewish kingdom of Himyar. The Jewish kingdom of Kaybar (in Saudi Arabia) and the once Jewish city of Yathrib (now called Medina – the birth place of Islam). It looks to me that the Kaybar Jewish confederacy made up of the numerous Jewish tribes of the vast Arabian peninsula (nicely described in the Koran as unbelievers) that were decimated by early Islamic fanaticism, modern rise of State Wahabism and the recent purges of the last Yemeni Jews who did not catch a ride on the magic carpet, are now saying to the Arab inhabitants: “How do you like the experiences of life disruption, home destruction, death or the submission to the will of the strong”?

Fourth, Libya. The place of the first ever recorded Jewish mass revolt against the Romans outside Judea (Bar Kochba revolt). Jonathan the Weaver, led the Cyrene (Roman word for Libya then) revolt. Jews in Cyrene and their role in subsequent Jewish revolts (like the Kitos war) indicate the pre-Christian, pre-Islamic Jewish presence. The last Jewish person, she was 80 years old left Libya in 2003. I am not going to go through the pogroms that the Jewish population have experienced on the hand of the 13 century Fatimids, Fascist Mussolini Italy colonization of Libya, Arab instigated pogroms for 1948 UN declaration of the birth of the Jewish state, the six-day war, and the ascension of Kaddafi regime. The Arab spring brought with it Arab wrath and madness. ISIS is 90 kilometers from the island of Jerba (The Jewish island of Jerba of Tunisia), according to one report. I am always wondering what Regina Waldman is thinking about her lost Libya of yesterdays, and how she now sees the utter destruction and the curse that befell her once beautiful country. Ezekiel’s prophesy?? I do not know. But it hard not to notice.

Entry 3 (I swear this is the last)

I am nearing the end of my dream world and yet something is missing. Germany. Now prosperous, strong among the EU nations, proud again for its economic and political clout. Yet it is this nation that was once a modern state culprit of brand new biological and ethnic anti-Semitism which had created an unprecedented realm of horror culminating in Shoah. It ushered the rationalization of death on an industrial scale. Here is my take of the current Germany and its connection to the Jewish suffering and past death experiences there. Has anyone wondered why so many people (refugees or not) from Islamic countries are trying to reach Germany by any means necessary? This once exclusively SS driven country was vehemently pushing people out as in Judenfrei, now everyone non-Jewish Semitic people are pushing toward it despite financial ruin, threats and risk of death. The fear of this horde is real among some Germans. I cannot stop thinking about the description of Ezekiel of Magog as this demon lay the land in waste and destruction. The prophesy of waste and chaos by non-assimilating tribes from the Middle East. Guess what, Arabs are Semites (linguistically speaking). It looks almost like the revenge is near or the curse is set in motion. Or maybe not. I do not know. I would like to entertain the idea. Even if full justice cannot be repaid for those who wronged the innocent Jews, justice can still be set in motion as to make those who instigated the wrongs to suffer from their the same wrongs but in different kind. The hands of God maybe at play, I do not know.