This statement by former foreign minister Tzipi Livni marks a break with her reluctance to even mention Jewish refugees when she was in office. From the Jerusalem Post (with thanks: Lily): 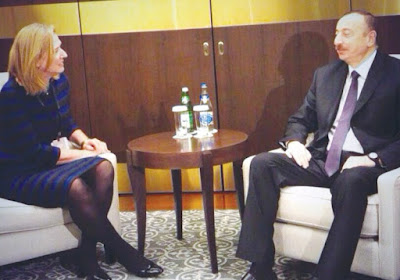 Europe should see the Palestinian refugees as an example of what not to do in its current refugee crisis, MK Tzipi Livni said at the Global Baku Forum in Azerbaijan on Friday.

Speaking at the international conference on security matters, Livni (Zionist Union) compared the absorption of Jewish refugees from Arab states to the situation of Palestinian refugees, saying that the latter are “used as bargaining chips” by their own leaders.

“Refugee status is inherited, and the issue makes it difficult to solve the conflict. They’re waiting for a solution that will never be,” she stated.

The world can only learn from Palestinian refugees how to create a problem, Livni added, emphasizing that they are the only refugee population in the world in which the status is conferred to later generations.

Livni the latest to forget Jewish refugees
Posted by bataween at Monday, March 14, 2016

These are the salient points (MK Livni is using) in almost all my talks on this subject (I've dome over 3 dozens by now). I took us a while for that message to sink in, for MKs and Israeli politicians; but better late than never.

off topic// On related subject of confiscated Jewish property in Egypt.

In January 2001, the Israeli bi-monthly, Nativ [published in Hebrew] ran an article on confiscated Jewish property in Egypt. The article was in Hebrew but here is a summary in English published in Nativ at the same time.

The Lost Jewish Property in Egypt
Itamar Levin
Following the establishment of the State of Israel, hundreds of Jewish owned businesses in Egypt were seized by the government. But the seizure came to its peak after the Sinai War, when a property valued today at 3-4 billion dollars was officially frozen and practically nationalized.

The first step was the freezing of British and French property in Egypt in November 1956, and the freezing of Jewish property – regardless of its owner's citizenship – followed suit a few days later. Far worse, the Jews were ordered to leave Egypt within a few days, and were only permitted to take with them personal belongings and very small sums in cash. More than 20,000 of Egypt's 70,000 Jews left their homeland within 6 months. In 1961 all of the big enterprises in Egypt were nationalized, and the remaining economic roots of the Jews were destroyed.

The community became smaller and smaller during the following years, and has only 100 members today. Most of the communal property is in terrible shape, as the community cannot afford its restoration. The private property, either sold – under-value – in the 1950s due to the official policy which made wealthy Jews leave Egypt, frozen after the Sinai War or nationalized in the 1960s, is still owned by the government or by those who took advantage of the Jewish distress and bought it at bargain prices.
LINK:
http://www.acpr.org.il/nativ_e/078-nativ-toc.htm#The Lost Jewish Property in Egypt