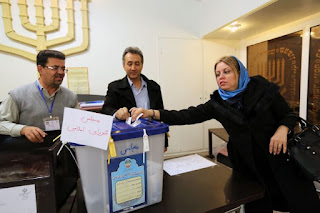 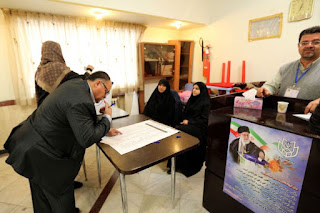 Jewish Iranians prepare to vote at a polling station in the Yusef Abad synagogue in Tehran on Feb. 26, 2016. There are about 17,000 Jewish citizens in Iran*, including 7,000 in the capital. There is one Jewish seat in the Iranian parliament.
(Abedin Taherkenareh/ EPA)

Jews voting in Iran's parliamentary elections in a Tehran synagogue. The western media are happily going along with the Iranian regime's PR campaign - projecting the image of a pluralist, tolerant, 'democratic', society. The reality is, that whatever the results, there will be just one Jewish representative in the Iranian parliament and he will be expected to toe the government line.

The Jerusalem Post warns against premature rejoicing that the 'reformists' are winning:

...while “reformists” performed well in Tehran, the nationwide picture is much different. The hard-liners seemed to do better than the pragmatists elsewhere in Iran and many of the independents who have been annexed to the pragmatists by wishful thinkers are in reality quite fundamentalist in their outlook as are many of the “pragmatists.” Indeed, the difference between the hard-liners and the pragmatists has more to do with strategy than principles. And as Meir Javedanfar, a lecturer on Iranian politics at IDC Herzliya noted on a post on his website, “because there were so many unknown candidates approved by the Guardian Council, it’s difficult to know to which camp some of the winning candidates belong.”

The Iranian mullah regime is exploiting the elections as a way of strengthening its legitimacy. But even if the elections were conducted in a truly democratic fashion and candidates were not disqualified en masse, the parliament, also known as the Islamic Consultative Assembly, has no real powers. As its name implies, the parliament fulfills more of a consultative function.