It has been argued that 'intersectionality', that voguish concept bandied about on US campuses - applies to all 'oppressed' groups except Jews. Not so, says Sigal Samuel in the Forward, producing evidence that Mizrahi Jewish intellectuals saw their fate bound up with Arabs since the 1950s, an argument popular on the radical anti-Zionist left. The comments I have selected below this extract do a good job of rebutting Samuel's assertions (with thanks: Amie): 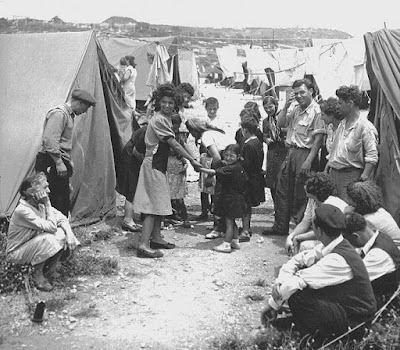 Ma'abara residents in the 1950s


"If you’ve been tuned in to the Israel-Palestine conversation over the past few months, you’ve probably heard the word “intersectionality.” The idea that different forms of oppression are linked — so that standing up for victims of sexism and homophobia should also mean that we stand up for, say, victims of Israeli state violence — has touched off a frenzy in the Jewish media.

"But whether you listen to those supporting or to those opposing the idea that Jews must stand in solidarity with Palestinians because our liberation is intrinsically tied to theirs, you’ll find that almost everyone is talking about this idea as if it’s a new development.

"Which is strange, because it’s not. And it’s only because of Jews’ fixation on a mainstream Ashkenazi-centric history that we’ve managed to forget how far back this idea goes among Mizrahim, Jews from Arab lands.

"They weren’t using the term “intersectionality” back then, of course — that was coined by black feminist scholar Kimberlé Crenshaw in 1989. But Mizrahim were developing a robust intersectional politics and culture way back in the early 1950s, soon after the State of Israel was created. As they struggled in ma’abarot, transit camps, many Mizrahi intellectuals and artists saw their fate as inextricably bound up with the fate of the indigenous Arabs, with whom they shared not only cultural markers like the Arabic language, but also the experience of severe discrimination at the hands of the Israeli government."

Here are three comments from the thread:


This is insanity. First of all, intersectionality itself is an inherently flawed concept, as it would have people put aside the specific, legitimate interests of their community for some broader left-wing goal.
Secondly, Samuel is being hugely disrespectful to the millions of Mizrahi Jews today who feel absolutely no sense of identification with "Palestinians". These people do not suffer from false consciousness - they are instead wisely able to differentiate between right and wrong, democracy and terrorism.
Fortunately there will continue to be a flowering of Mizrahi culture in Israel without any of the political gobbledygook that Samuel recommends. After all, German Jews in the US and Israel could appreciate Goethe and Beethoven without celebrating the Nazis.


One of the intellectuals quoted in the article tells us that Israel has to acknowledge that it is an oriental country in order to have a constructive encounter with the Arabs. I would have expected that the author would protest the demand that Israel adopt a particular collective identity. After all, she repeats the supposed demand that in order to be a good Jew one must shed "any aspect of Arabness". Our author, so it seems, has a very selective sensitivity. Israel has a right to be herself, and she has the right to expect others to accept her as she is. Moreover, the time has come to try and come to terms with the reality of conflict. It's really silly to think that this is a conflict between a "European" society and an oriental society. Such a view is merely an expression of animosity to Ashkenazim. The Arabs reject the Jewish claim that Palestine is their ancient homeland, and this Arab rejection includes all the Jews.

The Jews from the Arabic-speaking world did not have an Arab identity. There are a number of anti-Zionist intellectuals who claim that they are "Arab Jews", but their ideological fervor is not a reflection of the sociological reality. The Jews in the Arab world were not Arabs - not in their own eyes, and not in the eyes of the Arabs. Their peoplehood identity is Jewish.

Finally, it is important to point out to our author that animosity towards Ashkenazim is also a very improper trait. It's in the same nasty category as all the other prejudices.

Intersectionality-- the reason that Mizrahi Jews who, in 1948, were stripped of their possessions, deprived of their (second class) citizenship in Arab countries, and thrown out of their homes to find new lives in the fledgling Jewish state should now be feeling warmth and kinship for the Palestinians who would cheerfully murder them, and antipathy towards their fellow Israeli Jews. Makes about as much sense as most of what Sigal writes!

Which is ridiculous. We may have certain cultural commonalities with Arabs, due to having been colonized by them, but being Mizrahi meant being "dhemmi", always second and third class, no rights in Courts, huge "jizya" payments, dependent on whether the Muslim Ruler of the moment happened to like you or not, and constantly being shamed, forced to pay gangster style "protection" money....the Arabs NEVER identified us as "Arabs", nor are we, anymore than the Kurds, the Persians, the Assyrians...I am Mizrahi/Sephardi, my Family were in Hebron when the Arabs first came up the Perfume Road to fight the East Romans, and that was only in 638 CE. My Jewish History goes back much, much further than the colonizing Arabs, thank you very much!

The concept of 'Intersectionality' has always struck me as a moral principle but not one set in stone. In theory people who have been oppressed for whatever reason should feel some empathy for someone else in a similar situation. I would like that to be so but unfortunately this ignores the vital aspect of context and experience.

The concept of "Intersectionality" reminds me of another concept called the matrix of domination. This concept was a feminist theory driven concept devised by sociologist Patricia Hill Collins. In the nutshell, this concept suggests that one cannot understand group marginalization and subordination and subsequently activism or fight against oppression (whether groups are identified by class, race, ethnicity, gender, sexual orientation,religion, and whole host of other group identity).

In a sense, one cannot understand one's own plight against oppression unless one take a holistic view of other dimensions are at play. In other word, a feminist cannot fight oppression if she/he does not take into account her/his class, his/her race, his/her sexual orientation etc.. because all these intersect and make up a matrix of complex system of oppression. By looking at only one type group identity, one misses the complexity and the overarching system of oppression.

I always thought of this concept as a convenient way to deal with the multitude of identity politics, but it misses the point that not all groups suffer the same way, submit to the same ferocity and constantly being oppress.

Mizrahis do not have to understand the Palestinian Arab so-called suffering because it is self-inflicted. In fact, it is the Arabs that should reflect on their own suffering (if there is a genuine suffering) to recast their view of the suffering instigated by them and incurred on their once Jewish neighborly friends that shared their towns and villages in North Africa and the Middle East. Intersectionality or not, this can work in the towers and halls of academia, but at the ground level, there is no intersectionality.

The Forward is stridently leftist perhaps seeing this as the modern form of the original Yiddish newspaper's socialism.
It is also Ashkenazi centric with a condescending attitude toward Mizrahi Jewish experience. "Those" Jews...the Jewish others need the guidance of Ashkenazi anti-Zionists to explain to them their oppression at the hand of "white" Jews...the
need to demean the history of Jews of the Arab lands by showing them how any mention of their suffering is a plot to
refocus away from "white" Jewish oppression of Palestinians who by modern definition are a so called "people of color."
It's really insulting and glad to see that Mizrahi Jews refute such leftist propaganda gobbildygook which passes for intellectual discourse.
signed:
An Ashkenazi Jews who doesn't need to lecture Mizrahi Jews about their experience and I've never met a Jew from an Arab land that didn't identify as a Jew and not Arab...despite the fervent wishes of Askenzazi centric leftists that they don't have the intelligence to know how to appreciate the suffering of Palestinians and that Arabs are in no way responsible for this.