Islamists are 90 km from Jews of Djerba

The Jewish community of Djerba fears that it could become the next target for Muslim fundamentalists who are  just 90 kms away from the island. Ftouh Souhail, writing in Europe Israel,  says that a battle between jihadists and government forces took place at Ben Guerdane, the last town before the Libyan border. Jihadists have already spread chaos in parts of Libya. (With thanks: Ahuva) 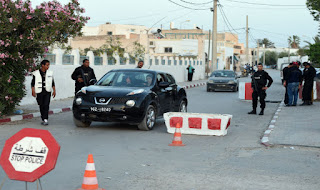 Thirty-six terrorists were killed, seven arrested and eight soldiers and civilians were killed on 7 March in clashes between Islamists and government forces at Ben Guerdane.

The Jewish community of Djerba fears it will be next. It  numbers 600 and is concentrated in the Hara Sghira of the island.

Israel says that there is a high risk of anti-Jewish attacks and is advising pilgrims to the Lag Ba' Omer festivities this year at the al-Ghriba synagogue not to travel to Djerba.

The Tunisian authorities, on the other hand, say that it is safe and that exceptional security measures will be taken to protect tourists visiting al-Ghriba.