Is a Mizrahi curriculum boost doomed to fail?

The Israeli government has pledged to inject more Mizrahi content into the Israeli school curriculum. But is this initiative, like previous ones, doomed to fail? Report in al-Monitor: 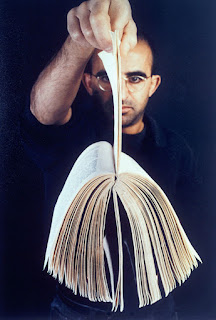 'Nine out of 400', a work of art by Meir Gal to demonstrate how few pages were devoted to Mizrahi history in Israeli textbooks
Moshe Shriki, director of the social leadership college Mimizrach Shemesh, strives to instill Mizrahi culture — the heritage of Jewry from Islamic lands — in his students, but it is not always easy. “The book ‘Faith and Redemption’ is a perfect example,” Shriki​ told Al-Monitor. “It’s a Jewish thought textbook for the public religious school system, published in 2014. The book covers 160 Jewish thinkers, only one of whom is Mizrahi.”

In September 2015, “​Faith and Redemption” caused an uproar in Israel as another example of the exclusion of Mizrahi culture and history from the Israeli curriculum. “We put together an alternative list of 30-40 Mizrahi thinkers and presented it [to the Education Ministry]. Now they have added an optional list of Mizrahi philosophers to the existing book. That is, the teacher can choose whether to teach about them or not,” said Shriki.

From Shriki's perspective, the place of Mizrahi authors and thinkers in the Israeli curriculum is critical. Shriki, also former principal of the alternative Kedma secondary school, said, “There were contributions from Mizrahi writers like Almog Behar and Eli Eliyahu in the [reading comprehension] portions of the matriculation exams in literature in recent years. But I don’t want them there. I want them in the mandatory curriculum.”


Israeli society deals quite a bit with inter-ethnic tensions. Such tensions, it seems, led the Education Ministry to make the dramatic announcement on Feb. 4 of plans to establish a committee to strengthen the Mizrahi cultural presence in the educational system. The committee is to be headed by the poet Erez Biton, winner of the 2015 Israel Prize and of Mizrahi descent. The goal of the committee is “to create balance in relation to the heritage of Eastern communities and to deepen the sense of unity among the people.”

this same issue in 2012, when the Libi Bamizrach coalition sent him a letter protesting the exclusion of Mizrahi history, literature and cultural heritage from the curriculum. A decade before that, in 2002, Education Ministry Director Ronit Tirosh had called for changing the mandatory curriculum so that among the writers covered, one-third would be of Mizrahi origin. In 2003, Education Minister Limor Livnat ordered that a chapter about “Jews in Islamic lands between the two world wars” be mandatory reading for the history matriculation Sami Berdugo be made a mandatory selection for the matriculation exam in literature. According to Shriki, the Berdugo story, “Hizo Batata,” presents a stereotypical image of Mizrahim.
exam and a story by the author

In 1997, the artist Meir Gal produced “Nine Out of Four Hundred,” a work in which he is shown holding the nine pages, out of a total of 400 pages, that deal with the history of Jews from Islamic lands in a textbook on the “history of the Jewish people in recent generations.” The book was used in Israeli schools for many years. Two years later, Yehuda Shenhav, a professor from Tel Aviv University, surveyed textbooks in Israel and found that not only was the scope of discussion of Jews from Islamic lands meager, its representation was erroneous and stereotypical.

“For generations, a large and significant group of Israelis have been educated without getting to know their own history and culture,” said Yossi Dahan, director of the Program for Human Rights at the College for Law and Business in Ramat Gan. He told Al-Monitor, “I learned about the Holocaust of European Jews and the Zionist movement in Europe, since history and literature have been enlisted [in the service of] Zionism in the education system. The story of those who were not part of the Ashkenazi [Eastern European] Zionist story was not told.”

Along with Shriki, Yehuda Maimaran, director of Alliance Israelite Universelle and a member of the committee established by Bennett, asserted that the important role of Jews from Islamic lands in Zionism has disappeared from the educational system. “The Mizrahi child does not encounter himself in textbooks; he does not encounter figures from the world of Jewry of Islamic lands who took part in the Zionist enterprise, in community leadership, in the settlement of the land of Israel,” Maimaran said. “It is as if the center of Jewish life was in Europe. Rabbi Moshe Kalfon of Tunisia wrote a book [‘The Redemption of Moses’] that paralleled [Theodor Herzl's] ‘Altneuland,’ describing the [ideal future] Jewish state and its character in all respects, [but] it is not taught.”