Surprise, surprise. The Guardian has published a letter  pointing out that Jews preceded Christians in their 'ethnic cleansing' from Iraq. 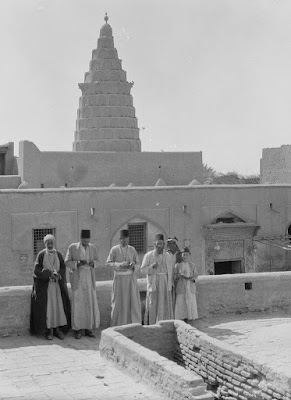 Jewish scribes at the shrine of Ezekiel, Iraq in the 1930s

"The decline in the number of Christians in Iraq is indeed disturbing (Loose canon, 25 March). It is part of a wider decline in the Middle East, where numbers have dwindled from 20% of the population 100 years ago to 5% today.

The Jewish experience in Iraq also reflects a story of a once flourishing community which has been persecuted to near extinction. Jews first went there 2,700 years ago, and while the community experienced highs and lows over centuries of Muslim rule, the population grew steadily. Jews accounted for one-third of Baghdad’s population by the time of the first world war, and by 1936, official figures showed there to be 120,000 in the country.

However, the period between the world wars, when the British mandate ended, marked the start of terrible antisemitic persecution in Iraq. Thousands of Jews fled: 104,000 emigrated between 1949 and 1951.

The history of the Jews in Iraq is a warning, if any were needed, of the unfolding tragedy facing the Christian community there today.