The festival of Purim celebrates the defeat of the wicked Haman, who planned to massacre the Jews of Iran. The Jewish Press reports: 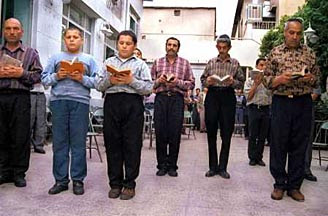 While there’s no problem in Iran to yell out “Death to America” or “Death to Israel”, don’t you dare paint graffiti on a wall saying, “Death to Haman”.

Two 17-year-old Jewish boys have been arrested in Tehran, the Iranian capital, for writing that message on a building’s wall as part of a Purim prank, according to Maariv.

Iranian police have been informed that the act was not a political one and simply connected to the upcoming holiday. The police said the would release the boys, but haven’t done so yet.

Read article in full
Posted by bataween at Sunday, March 20, 2016