The Israeli Foreign Ministry's Arabic language Facebook page has become the scene of a heated debate over a Shabbat dish. While Iraqi and Egyptian commenters were mostly sympathetic, Palestinians were not. Israel Hayom has the story: (with thanks: Lily) 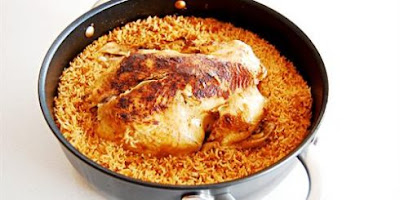 Over the weekend, the ministry's "Israel speaks Arabic" page posted a recipe for tibit, the traditional Iraqi Jewish chicken and rice dish slow-cooked and eaten on the Sabbath. The post said tibit is part of the heritage Iraqi Jews brought with them to Israel, and that many families still cook it according to recipes passed down from generation to generation.

The post has gained thousands of likes and shares and been viewed more than 200,000 times. Some commenters called on the Foreign Ministry to open a separate page for posts about Jewish and Israeli foods to help bring the peoples of the region together. A number of Iraqi commenters praised their former fellow countrymen and their rich culinary heritage. Some said they missed the Jews who were uprooted from Iraq and expressed hope they would return someday.
But Palestinian commenters took a more negative approach. They criticized Iraqis who expressed support for Israel, and some even claimed Israelis used the blood of Palestinian children as an ingredient.

The Foreign Ministry said that for some time now, it has noticed positive comments about Israel from Iraqi commenters. Nearly 1 million people from the Arab world follow the ministry's Arabic language Facebook page. A majority are from Egypt, but there are also many from Iraq.

Read article in full
Posted by bataween at Wednesday, March 23, 2016

This post really does prove the idiom: The way to a person's heart is through the stomach (well, assuming virulent hatred doesn't get in the way).

How is it possible that anyone can take the Palestinians seriously when they claim Israelis and Jews routinely kidnap their children to make this dish? All the way over here in London, we grew up eating this meal. I make it for Shabbat all the time. Did I take a plane to BG and go on a hunt for Palestinian kids to use or track them down in London? Not even ignorance, just utter stupidity