Why Jews buit a low cupola on their synagogue

Stories of 19th century ill-treatment of Jews as dhimmis abound, but every so often the bright light of tolerance shows through the darkness, as Eliyahu M' Tsiyon describes in his blog. 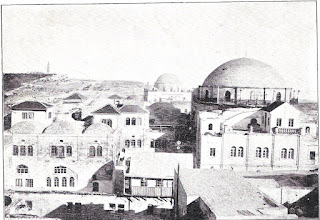 The domed Hurva synagogue in Jerusalem's Jewish quarter, as it looked before 1899.

Muhammad Ali's regime was much more tolerant towards the dhimmis (sometimes called rayahs) than the preceding Ottoman regime in Israel --or than the previous Mamluk regime [under Ottoman suzerainty] in Egypt-- had been. This tolerance extended even to the Jews, who had been the low man on the totem pole, the underdog of the underdog, before his time. This description of the Jews' previous status was attested by Chateaubriand after his 1806 visit to the country .

Neophytos reported that after the 1834 uprising, Christians were liberally granted permits to repair and in practice were allowed to build new structures. Observing this, he noted, the Jews too asked for repair permits. As he describes the situation, the Jews received a permit to build. In some cases, Christians had built new structures without specific permission, since they were in practice allowed to do so.

"As we are on the question of repairs, we must say something about the Jewish Synagogue. One year ago only, seeing the liberal dispositions of Mehemet Ali Pasha [Muhammad Ali] and Ibrahim Pasha [his son, general, and deputy], they dared to speak about their Synagogue. They asked that their House of Prayer, being in a ruinous condition and in danger of falling in, might be repaired. So, those who did not even dare to change a tile on the roof of the Synagogue at one time, now received a permit and a decree to build. They finished at the end of August. They built the Synagogue all of stone , and in place of the wooden roof they erected a Cupola. The building was large and spacious, and could contain about 1,000 persons. It was long, but only 10 pics in height. The Cupola was also very low for they feared the stability and certainty of the government."*

One stipulation of dhimma was that non-Muslim structures must not be higher than Muslim structures. Hence, the Jews built the cupola [dome] low since they feared that if Muhammad Ali were overthrown or driven out [as did happen in 1840] then the restored Ottoman regime or another new regime might destroy the structure for being higher than a Muslim structure.

Note that NeoPhytos describes the Jews as the most abject, humiliated, and intimidated of the dhimmis, more so than the Christians. He writes that only after the Christians had obtained permits, "they dared to speak about their Synagogue." More to the point, he continues, "those who did not even dare to change a tile. . . at one time [under the previous dispensation], now received a permit."

Read post in full
Posted by bataween at Sunday, February 07, 2016

Email ThisBlogThis!Share to TwitterShare to FacebookShare to Pinterest
Labels: Dhimmitude