What are we doing to stop 'cultural cleansing'? 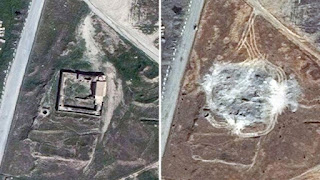 Just recently, satellite images confirmed that the oldest Christian monastery in Iraq has been destroyed by the jihadist group Islamic State (IS). What is the international community doing - if anything - to stop 'cultural cleansing'? Lyn Julius blogs at Clash of Cultures in the Jerusalem Post.

St Elijah's stood on a hill near the northern city of Mosul for 1,400 years. But analysts suggested it had been demolished in late 2014, soon after IS seized the city.

A year ago,  UNESCO was sufficiently alarmed by the destruction of cultural and religious sites that it  hastily convened a conference at its Paris headquarters to discuss what can be done to preserve what's left in Iraq and Syria. The iconoclastic jihadists of Islamic State - or Da'esh - had captured a region in northern Iraq which contained 15 percent of Iraq's registered archaeological sites.

Believing that shrines ought to be destroyed lest they encourage idol-worship, they have already blown up or burnt to the ground shrines such as the tombs of Jonah and Seth, Christian churches and Shi'a mosques. In both Syria and Iraq, Islamic State have demolished, pillaged and dug up archaeological sites, sometimes with bulldozers, and sold relics on the international black market in order to finance their malevolent deeds.

Like most UN agencies, UNESCO has blown hot and cold towards Israel and the Jewish people. But this time, UNESCO had made a point of including the Jews in its conference. The UNESCO director-general, Irina Bokova, had  condemned the destruction in May 2014 of the Jobar synagogue near Damascus. A shrine has stood on this site, legend has it,  since the time of Elijah the Prophet.

When a JJAC delegation, accompanied by CRIF, the body representing French Jews, submitted a list of 100 endangered Jewish sites to Mrs Bokova in June 2014, she lent a sympathetic ear. And when Professor Shmuel Moreh, who has worked long and hard for the preservation of ancient Jewish sites in Iraq made his case, Mrs Bokova  - or her aides - were listening. Professor Moreh was flown over from Israel to be a special guest at the conference, along with representatives of Kurds, Assyrians, Turkmen and Yazidis.

Since then, IS has wreaked even more destruction. In August 2015 it shocked the world  when it  released a video of the Temple of Baalshamin, at the world heritage site of Palmyra in Syria, being blown up. Explosives were reported rigged to another, larger temple, dedicated to the god Baal.

In September, UNESCO accepted an Italian proposal to send in the 'Blue helmets' - the UN international peace keeping force - to protect endangered sites.

In October 50 world leaders voted to allocate resources for some 10,000 new troops, police, hardware, and training schemes for UN forces.

In spite of their greater number and better hardware, It is not clear how the  'blue helmets' will fend off the determined and fanatical jihadists of IS.

IS and other militant groups are guilty of "cultural cleansing" in the Middle East, the head of the UN's heritage organisation has said. "Culture and heritage are not about stones and buildings - they are about identities and belongings."

A conflict against culture is, by extension, an effort to erase the identity of a people, especially vulnerable non-Muslim minorities. These minorities once comprised the rich ethnic and religious patchwork of a pluralistic Middle East. Now they are being driven to extinction.

When the neighbors have been ethnically cleansed, as the Jews had been from Syria and Iraq, with no prospect of return, who will speak up for their heritage? Who would ensure that when the time came to rehabilitate and renovate, traditional Jewish shrines such as the most revered of all, Ezekiel's tomb, would not be turned into mosques?

It is already happening. The Hebrew inscriptions had been removed from the renovated tomb of Joshua the High Priest near Baghdad. Loudspeakers had already been affixed to Ezekiel's tomb, and Koranic inscriptions hung on the walls. Who would ensure that the original character of the shrine would be retained?

Beyond the expression of high-minded sentiments, none of these questions are being answered.

In one important respect international action  might achieve results: museum chiefs declared they would treat with suspicion any artifacts offered to them from the Middle East, and would conduct "due diligence" checks as far as possible. But private collectors were less likely to be circumspect about the provenance of items. The international art market was a  vessel  too leaky to render watertight.

It is tempting to conclude that organisations like UNESCO, which were founded on the pillars of intergovernmental law, seem well past their sell-by date in a world where non-state actors ride roughshod over "kaffir" international treaties and conventions. Even before the era of Islamic State, neither Syria nor Iraq were signatories to the 1954 Hague Convention for the Protection of Cultural Property in the event of armed conflict.

Read blog in full
Posted by bataween at Tuesday, February 02, 2016