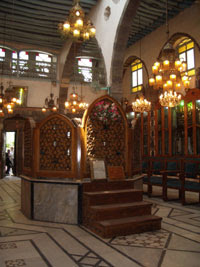 The Franjieh synagogue, the last functioning synagogue in Damascus, appears in good condition, according to a recent video clip on Ynet News.

This short video shows a man (possibly Albert Cameo) opening it up.  There are just 16 elderly Jews remaining in the war-torn city. They are 'under the protection' of the Syrian president, Bashar al-Assad.

The Franjieh synagogue is the only known synagogue remaining in or near Damascus after the Jobar, or Eliyahu Hanavi synagogue, was bombed in 2014.
Posted by bataween at Tuesday, February 23, 2016