The Aleppo Codex has been added to UNESCO's registry of 300 cultural treasures and documents, Haaretz reports: 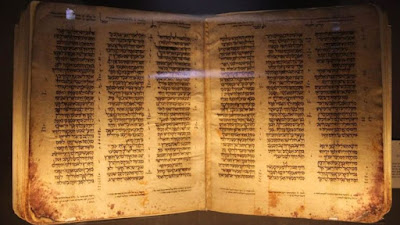 Sixty years after it was secretly smuggled into Israel from Syria, the Aleppo Codex – purportedly the oldest and most authoritative copy of the Hebrew Bible in existence – has been recognized as a unique treasure and will be included in the International Memory of the World Register, compiled by the United Nations Educational, Scientific and Cultural Organization.

The codex, or Crown of Aleppo (called Keter Aram Tzova in Hebrew), is on permanent display at the Israel Museum in Jerusalem. The provenance of this extremely important manuscript, which was written in Tiberias around 930 C.E., is shrouded in mystery, contradictory information and half-truths. The original copy included 500 pages but 200 have disappeared since it arrived in Israel.

On Monday UNESCO officially recognized the codex – also called “the most perfect copy of the Hebrew Bible” and "the perfect edition of God’s words” – as a unique item with universal characteristics. As such, it is worthy of inclusion in the organization's registry of 300 items and collections, located around the world, which it started compiling in 1995. These include cultural treasures that have contributed to human development, and the documents it includes are well-preserved and accessible. 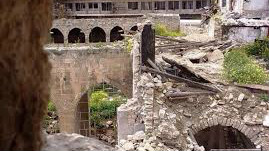 This photo showing damage to the Great synagogue is from 10 February 2016 (Photo: The Amaliah Foundation)

The Times of Israel reports: The Central Synagogue of Aleppo sustained minor damage in fighting, according to photos provided by locals to an Israeli-American activist for peace in the war-torn country.


The damage affected a corner of the building and was probably caused by shelling, according to Moti Kahana, the founder of the Amaliah not-for-profit group, which aims to relieve the suffering of refugees from Syria and empower women there. The corner area was covered by debris, making it difficult to ascertain the extent of the damage caused to the building, which is believed to have been built in the ninth century AD.

Ruthie Blum in The Algemeiner

PoNR adds: the synagogue was already damaged by fire after the 1947 riots and has not been in use since.
Posted by bataween at Thursday, February 11, 2016