The hidden history of Jews in Rawalpindi 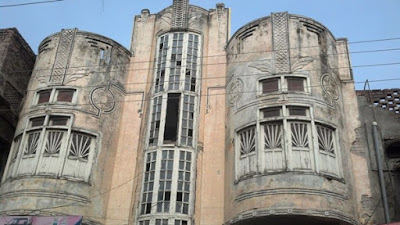 This astonishing building was once used as a synagogue

A modernist building is the only reminder that Jews, fleeing persecution in Iran,  once lived in Rawalpindi. But locals and the government are cagey about discussing them. The electoral roll has 809 Jewish names, but there are no known Jews in this Pakistani city today. Sahif Tahir writes in the Express Tribune (with thanks: Andrew, via Celia) :

Compared to other colonial and pre-partition buildings in the area, the exterior of this building indicates that it has been maintained. Along with the David stars that smile proudly at onlookers, the building is adorned with bat wings (symbolising good luck) along with the iconic Masonic compass symbols embellishing the doors. The building resembles a synagogue in India that was constructed by the Jews from Iraq and Iran in the late 1800s. The affluence and grandeur of a wealthy class is quite marked and parallel in the two infrastructures.

The history of Jews in Rawalpindi dates back to 1839 when many Jewish families from Mashhad fled to save themselves from the persecutions and settled in various parts of subcontinent including Peshawar and Rawalpindi. Since they were traders, Babu Mohallah (at that time a business centre) in a location close to the railway station, urged them to settle within this area. According to 1901 census and Rawalpindi Gazette, Mashhadi Jews were a thriving tribe of Rawalpindi. However, after partition, many families migrated to Bombay and the rest left gradually in the late 60s.

At present, the word ‘Jews’ is only limited to an old British administrative gazette in TMA building opposite Gordon College which is not open to the general public and academics.

This stunning building, once used as a synagogue and assembly hall, is now in shambles. It is occupied by three families who refuse to talk to visitors and discourage them looking inside. The locals say this area used to comprise of other such buildings; they were either demolished or renovated to curb the identity and with the passage of time new plazas and multi-story residential buildings took their place. A similar building still exists in Ahata Mitho Khan which used to have the same carvings and David stars but was recently renovated and converted into a spare part market – Khan Market.

Despite some articles on the Jews that reside in Karachi and a slight mention of Mashhadi Jews, there’s apparently no information on Rawalpindi Jews, their life styles and worship. The area, being in close proximity to the GHQ and religious sites, is also quite socially sensitive. The locals are resilient in talking about the community – some because of hatred, and some because of fear. This act of defiance doesn’t just lie among the locals, but is also rooted within the government. While wandering among the streets, you will be stopped and questioned by officials. The locals also resist talking about the history and shed very limited information. However, an old resident who was born in the neighbourhood in the late 30s said something astonishing,

“There were Jews living in the city till late 90’s. Although the family moved to some other city, they still come and visit these streets.”

Most of us are practically unaware of the fact that Jews were once an active part of our community and even now continue to reside in this country. In 2013, the electoral list exhibited an astonishing number of 809 people who declared themselves as Jews. Pakistan, a non-Arab country that was never technically in war against the Jewish state, is one of its staunch opponents. There are a number of Jewish families living in Tel Aviv who distinguish themselves as Pakistani.

Despite undeclared defense ties and cooperation, our hostility towards the Jews is virulent; our dislike is evident in just our attitude towards their infrastructure (which is just as integral to our own history!).

These buildings are rich with history, lineage and culture. We have a duty to preserve it for generations to follow rather than treating them the way we treat our minorities, as a British journalist aptly put it,


“To be a Jew is to be a scapegoat – as unnerving an experience in Pakistan.”


Read article in full
Posted by bataween at Sunday, February 28, 2016

In the heart of the city, you will find Raja bazaar, one of the oldest local markets in Pakistan. The bazaar is known for its huge selection of affordable products including electronics, apparel, shoes, and jewelry vice versa.
Review my article on Ilamabad Vs Rawalpindi Where Should You Live? and share your thoughts on the comment section.