On 27 January , Iraqi Jewry commemorated the 47th anniversary of the hangings of nine Jews in Baghdad. For Hebrew-speakers, this moving 50-minute interview by the Babylonian Jewry Center at Or Yehuda with one of the victims' widows captures the terrible trauma she experienced under the Baath regime led by Saddam Hussein.

Salima Gubbay lived with her husband Fuad and three children in Basra. They were among the 3,000 or so Jews still remaining in Iraq. She recalls how secret service men came to ransack the house and take her husband away. Her young son David, four years old, screaming for his father, tugged so hard on the jacket of one of them men that he tore off two buttons. They flung him against the metal garden gate.

The family had had a chance to escape earlier, but Fuad did not want to put his wife Salima, who was pregnant, at risk.

Fuad's interrogators pointed to the transformer which powered the airconditioning unit in their living room and accused him of sending secret messages to Israel. Saddam had ordered 20 Jews to be arrested and premeditated the execution of a group of Jews as spies after Israel's victory in the Six-Day war. He had told a rabbi to prepare nine graves.

Before he was hanged in prison, Fuad shared a cell with another Jew. When he learned he was going to be executed, he wrote a letter to his wife and told his cellmate to deliver it to her. "Don't cry for me", he wrote to her, "it is God's will. Just think of my death as in a car accident. The main thing is to look after your self and the children. You are free to do as you wish," he wrote, sending back his wedding ring.

When she heard of her husband's execution - the Jewish prisoners were hanged in prison before their bodies were strung up in Baghdad's Liberation Square.
her first instinct was to commit suicide, and stab her unborn child. 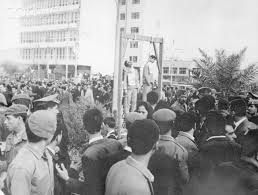 The scene on 27 January 1969 in Liberation Square, Baghdad

She moved in with her mother; A few months later her mother was run over in a car 'accident'.

Salima could not feed her children and was desperate to leave Iraq, but could not even get permission to get to Baghdad. The day before she left, she dreamed of her husband Fuad: he appeared and gestured towards the mountains. Eventually she was smuggled through the mountains of northern Iraq into Iran with her children.

Widows of two executed Jews speak up
Posted by bataween at Wednesday, February 03, 2016