Eleven Jewish organisations have endorsed a petition addressed to President al-Sisi, urging the government to undertake the preservation of Jewish heritage. The petition also entreats the Egyptian authorities to make accessible communal records, a long-term sticking point. Descendants of Egyptian Jews are not even allowed photocopies of birth, marriage and death records - central to their religious and civil identity. 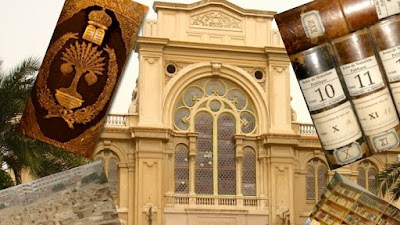 The move to start a petition, spearheaded by the Nebi Daniel Association, based in London and Paris, comes after 14 years of fruitless engagement with the Egyptian authorities and in the face of indifference of international bodies such as UNESCO. Since the Arab Spring, the Egyptian government has refused to enter a dialogue with diaspora Egyptian-Jewish representatives.

The signatories feel that unless a plan is formulated soon, it will be too late. With just 14 Jews remaining of a community of 80, 000, there will be no more local community to manage Egypt's Jewish heritage.

The petition's main demands are:
1.     The scanning of all existing Jewish archives, particularly religious and civil identity records in the synagogues and making the scans freely available.
2.     The donation to various Jewish community synagogues across the world of some of the 150 Torah scrolls which fall outside the 100 years Egyptian Antiquities rule.
3.     The restoration of the existing synagogues and cemeteries, in particular, the Bassatine cemetery in Cairo, giving easy access both virtually and on the spot.
4.     The development of a comprehensive inventory of the remaining communal assets and a plan for their preservation.
5.     The creation within one of the existing synagogues of a museum of the Egyptian Jewish heritage that would encourage tourism.

The petitioners conclude: "It is our hope that your Excellency will allow us to implement these steps and, to this end, we request a meeting with the appropriate officials to develop such a plan."