'Safe Spaces' are all the rage, yet are being denied to Jewish students on campus, even 'Jews of colour' like Iranian Jew Arielle Mokhtarzadeh. According to The Tower, US students are raising the banner against every form of racism except anti-Jewish racism. (Even the Holocaust is now being referred to as 'white on white' crime). What's more, universities are petri dishes for antisemitic slanders. 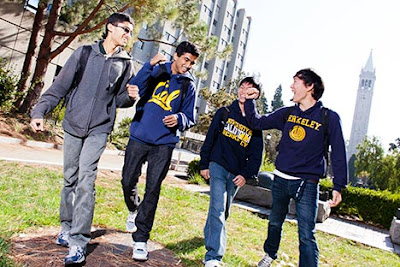 Mokhtarzadeh applied to the Students of Color Conference with the hope “of learning more about the experiences of communities of color at the UC… [and] sharing with those communities the experience of my own,” she told me. As an Iranian Jew, she believed her identity as both a religious and ethnic minority granted her a place to belong and thrive at the SOCC. Rosenberg (who requested a pseudonym so that he could speak freely about campus issues without fear of potential retaliation) said that growing up in the Bay Area had taught him to be an active member of social justice movements and progressive communities. “I was always encouraged to take initiative on issues and movements that didn’t directly affect me,” he said. “I wanted to learn more about the struggles that my fellow students were going through.”

But their experiences as Jewish students at the SOCC would soon inspire a rude awakening: the campus progressives who were fighting for justice on college campuses for students of color weren’t only ignoring anti-Semitism and attacks on Jewish identity—they were sometimes the ones perpetuating it.

This was quickly made clear on the first day at a session called “Existence is Resistance,” hosted by leaders of UC San Diego’s SJP chapter. Students discussed the boycott of Israel as an issue of urgency for students of color.

Rosenberg and Mokhtarzadeh told me that they originally had no intention to engage in dialogue about Israel at the conference, but they were horrified at how attacks on Israel soon devolved into attacks on the Jews. “The session went way beyond the boundaries of what was appropriate or truthful at the SOCC,” Rosenberg recalled.


For example, they said that Israel was poisoning the water that they sell into the West Bank, and raising the price by ten times. Any sane person knows that this is not true. They also said that when Jewish-American students go on Birthright trips, the Israeli government offers you money to live on a settlement. A number of things like that.

Rosenberg also stated that “There was also no mention of the Holocaust when talking about the history of Israel. They said that in the late 19th century, Jews decided to move into this land and take over it. They completely white-washed our history as a people.”
Mokhtarzadeh was also horrified by the rhetoric used during the session.


Over the course of what was probably no longer than an hour, my history was denied, the murder of my people was justified, and a movement whose sole purpose is the destruction of the Jewish homeland was glorified. Statements were made justifying the ruthless murder of innocent Israeli civilians, blatantly denying Jewish indigeneity in the land, and denying the Holocaust in which six million Jews were murdered. Why anyone in their right mind would accept these slanders as truths baffles me. But they did. These statements, and others, were met with endless snaps and cheers. I was taken aback.

At a conference facilitated by peers who they believed were fighting the righteous battle against racist speech and hate crimes, Mokhtarzadeh and Rosenberg heard anti-Semitic statements that were met with applause and approval—statements like “the state of Israel pays Jews to move to Israel to join the army and kill Palestinians” and even “you shouldn’t buy Ben and Jerry’s because they’re Jewish and have a shop in Israel.” But perhaps the most painful, and upsetting portion of SJP’s presentation was the section called “Intifada: Peaceful Uprising.”

Mokhtarzadeh, a proud Zionist, raised her hand to protest, but it was too late. The whole room—representing a diverse cross-section of progressive activists and students of color—was holding hands, embraced in each other’s support and calling out “Free, free Palestine!”

They walked out, Mokhtarzadeh on the verge of tears. Rosenberg tried to reflect on what he had heard and experienced. “It wasn’t even just about that session,” he confessed.


It was a prevailing sentiment that I felt at the conference and in the progressive community, that because I am Jewish, I cannot be an activist who supports Black Lives Matter or the LGBTQ community. When I heard that among my peers that “the Jews are oppressors and murderers—How can you care about students of color on campus when they’re murdering our people abroad?”—it quickly dawned on me that it wasn’t that they don’t like us because we’re pro-Israel—they don’t like us because we’re Jews. We were targeted. It’s such a shame that the SOCC solidified and supported this belief of mine.

It was, ironically, in a safe space intended to protect students from discrimination and bigotry in which their Jewish identity was marginalized, ostracized, and politicized. And it was the progressive students and students of color—often themselves targets of hate, bigotry, and discrimination—who were the propagators of ancient hatreds against the Jewish people.

Mokhtarzadeh still painfully remembers that weekend. “I was made to feel uncomfortable and unwanted in a space that was meant to be inclusive and safe,” she said. “It was in that moment, during that conference, that I realized that every identity and every intersection of identity was to be welcomed and championed in progressive spaces—except mine.”

An intersectional failure (Tablet)
Posted by bataween at Wednesday, February 10, 2016

This seems to be a staple of the University of California system as a whole. I went to UC Santa Barbara and saw the "apartheid wall" on display during Israeli Apartheid Week, with quite a few faculty members being signatories to the BDS campaign. It got to the point where my roommates told me I needed to be "objective" and distance myself from Israel since they were committing "genocide" against the Palestinians.

I say kol hakavod to Arielle and "Rosenberg" and to you for standing up to the racist, anti-Jewish intimidation.

But bear in mind that faculty and administrators and US government officials and the media all collaborate in trying to marginalize and persecute Jews.

I've heard the 'you don't have a right to be outraged that 2 of your people have been murdered compared to our 100 people who have been murdered argument' on a constant basis. Like pro Palestinians hold the copy write on suffering and death