The Jewish 'pirates' allied themselves with Muslim powers in order to avenge their expulsion from Spain. The charge of piracy seemed an easy one to pin on Samuel Pallache by his enemies. He  was probably considered more of a naval commander by his friends and allies.  Jewish Currents reports:  (With thanks: Michelle) 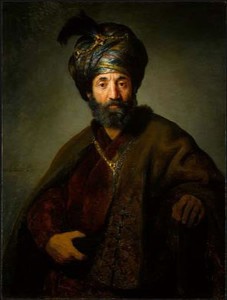 Samuel Pallache, known as the “Pirate Rabbi,” died on this date (6 Feb) in 1616 (some sources say February 4) in Amsterdam, the city where he had founded a community of Sephardic conversos in 1591.

Pallache, who grew up in the Jewish quarter of Fez in Morocco, had rabbinical training but opted to follow in the footsteps of Sinan, the 16th century “Famous Jewish Pirate” (aka “The Great Jew”) who had avenged himself against the Inquisition by raiding Spanish ships in the Mediterranean.

Pallache’s own exploits as a privateer sailing under the Dutch flag and for the sultan of Barbary were also legendary. He was also responsible for one of the first official treaties between a European country and a non-Christian nation, signed between Morocco and the Netherlands in 1610. In 1614, Pallache commanded a small Moroccan fleet that seized some ships belonging to the king of Spain, with whom Morocco was at war.

The Spanish ambassador had him arrested and tried for piracy, a trial that ended in an acquittal. At Pallache’s funeral, Prince Maurice of Nassau and the city fathers of Amsterdam marched behind his bier, followed by every member of the Jewish community, including women and children.