Jewish journo's Shabbat with the Jews of Tehran

"They are separate but equal, free yet contained and the regime lets them know this with their perennial outburst of Holocaust denial and unbridled anti-Zionism. Much like the country in which they reside, they are a community full of contradictions and with beauty and darkness in equal measure."These are the words of Annika Hernroth-Rothstein, a Swedish journalist writing in Jewish News. Hers is an eloquent piece, but disappointingly superficial, perhaps because her government minder was with her at all times. (With thanks: Ralph, Michelle) 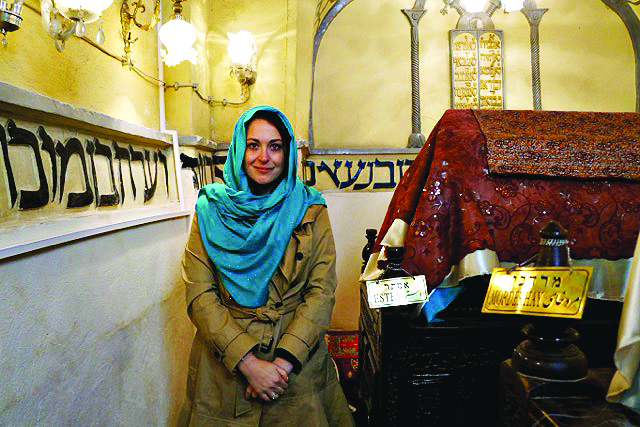 Annika Hernroth- Rothstein in the Abrishami Synagogue in northern Tehran

By the fourth stanza of Lecha Dodi, I can feel the tears streaming down my face, and I quietly surrender to the moment. The woman next to me puts a heavy hand of comfort on my shoulder and we exchange a smile that is equal parts exploration and familiarity.

Jewish artefacts inside the synagogue

The century-old Abrishami synagogue is located on the second floor of an unassuming grey building in Palestine Street in north Tehran.
The top floor houses a busy yeshiva and in the basement there is a ballroom-style kosher restaurant often used for the community’s many weddings and barmitzvahs.

Every day, there are two minyanim here and, on Shabbat, the synagogue welcomes around 250 people, generations of Persian Jews bound together by tradition and necessity.

I walk in right after sunset and immediately all eyes turn to me, the 5ft 9ins blue-eyed oddity marking a stark contrast to the otherwise homogenous congregation. I’m ushered to the front by Dina, a short black-haired woman in her late 70s and, in a mix of Farsi and Hebrew, she introduces me to the other women sitting in the prestigious front row.

Farideh, Liora and Gilda immediately start asking me questions in a hushed tone: am I married? Am I looking? Would I consider staying put? And my answers are debated and the information swiftly passed along down the many pews.

In so many ways it is just like any shul – the chatter and bad ventilation, the obvious hierarchy and the children running rampant, ignoring the older mens’ condemning stares. In others, it is unlike any place I’ve ever known.

I came to Iran to see for myself what Jewish life is like behind a wall of dogma, having had it be a looming presence in my religious and political life for quite some time. When I applied for the journalist visa, I was blissfully unaware of what it would feel like to get on that plane, armed with nothing but a siddur and a newly purchased veil. Most of my friends and family urged me not to go, sending me articles chronicling the atrocities I would encounter, and when I was handed that ticket saying “Khomeini IKA,” I prayed they were mistaken.

Thirty minutes before we landed in Tehran, I started tying my hijab, using the printed instructions I had found online, tucking every strand of hair into the multicolored cloth. Lastly, I took off my Magen David for the first time in years and I put it in my purse between two pieces of paper.


Jewish Iranians rely on their synagogue on Palestine Street to study and socialise
I’m not sure what I expected, but I do know it wasn’t what I found. In Tehran alone, there are 7,000 Jews residing and the vast majority of them are Orthodox and highly observant, and several smaller communities are still thriving in ancient cities such as Isfahan and Shiraz, putting the total Jewish population of Iran at approximately 15,000.

At the time of the Shah, it was seven times as large, but the 1979 Islamic revolution caused more than 80,000 Jews to leave for Israel and the United States, never to return. During the reign of the Shah, Jews saw little of worry, but the Islamic revolution brought not only hatred toward Israel but also violent anti-Semitism, resulting in harassment, repossession of assets and the public execution of Jewish community leader Habib Elghanian, accused of espionage for the Zionist regime.

An older Iranian Jewish man
It doesn’t take long for me to be invited to several dinners, and after services we walk in a gentle pace to the house of the community leader who has proudly won the bid.

Next to me is my assigned government handler, staying close throughout the trip, and I can’t help but feel as if I have somehow invaded their space and broken an unspoken rule.

There are fewer Jews in all of Iran than there are in Charlotte, North Carolina and we'll be in Charlotte long after all the Iranian Jews are a memory.

I once read a theory that the number of jews in Iran is much smaller than the official counts.