First Jews go, then other minorities in Pakistan 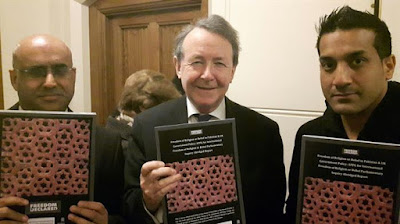 From left: Ranbir Singh of  Hindu Human Rights, Lord Alton, and Wilson Chowdhry of  the British Pakistani Christian Association at the report launch on 24 February

Update: the BBC has made a film about the plight of Christian asylum seekers in Thailand

The eradication of the Jewish community of Pakistan sets a dangerous precedent for the future of other faith communities, a British report into religious freedom in Pakistan has concluded. However, it does not have enough information to say if what is left of the 'community' is still at 'real' risk.

The (Westminster) All Parliamentary Group for International Freedom of Religion and Belief (APPG), chaired by Lord David Alton, heard evidence from 20 different organisations over three months - among them, Harif, the UK Association of Jews from the Middle East and North Africa, about the plight of the Jewish community. There are thought to be ten families of Jewish origin masquerading as Parsis or Muslims in Pakistan.

Here is an extract from the report's discussion of Harif's submission:

"Fishel Benkhald is Pakistan's only self - declared Jew. He wants to restore the cemetery and rebuild the synagogue in Karachi. He stated that: "My dream is to gain empathy. Later I will try and get help and start the process for a small synagogue " .

"In 2009, the constant anti - Semitic propaganda and conspiracy theories from the Pakistani government and media sickened him, he wrote that: "My political side outgrew my fear. I felt less hesitant to claim my religion more publi cally than I would have before”.

"In February 2014 Fishel, whose father is Muslim but whose mother is Jewish (and therefore considered Jewish under Jewish law) planned to change his official religious status from Islam to Judaism. He said "It is dangerous, but I will go at least once to record my request so their response can be documented."

"The APPG heard that NADRA, the database in Pakistan which handles citizenship, denied his request to change his identity from 'Muslim' to 'Jew'.

"This is a concerning outcome as it represents a flagrant violation of one ’ s freedom to pursue and manifest one's religious belief. It is also a worrying development for the trend of plurality and religious freedom in Pakistan.

"As Harif UK highlighted, “the ethnic cleansing of minorities sets a dangerous precedent for society at large.”

"We have heard testament of the destruction of the Jewish community in Pakistan, and with the continuing trends of high levels of persecution and discrimination against other religious minorities discussed in this report, it is perhaps a worrying sign that there may be a risk of the eradication of other minorities too.

"Conclusions: The APPG is concerned at the apparent virtual eradication of the Pakistani Jewish Community and fears other minority groups may suffer a similar fate if the trajectory of religious freedom in Pakistan does not proceed in a positive direction. Due to the very small size of the Jewish community in Pakistan, the APPG cannot conclude whether members of this community are currently at real risk of persecution, however we do recognise that this is a result of past persecutory action against the Jewish community.

"The APPG recommends that further evidence be gathered on any remaining Jews in Pakistan and that all Jewish asylum cases being claimed on the grounds of religious persecution be analysed on a case - by - case basis with the cumulative grounds for establishing persecution, as outlined above, being taken into account."

The report generally challenges the complacency of the UK government which did not always deem persecuted minorities to be at 'real' risk. A number of Pakistani Christians have been forced to seek asylum in Thailand where they have been interned under terrible conditions. It was his visit  to a detention camp in Bangkok that prompted Lord Alton to investigate why the British government was delaying granting asylum to refugees from Pakistan.

Read report in full
Posted by bataween at Thursday, February 25, 2016

Thank-you so much for this post. I had no idea that there were Jews in Pakistan. What a very brave man Fishel Benkhald is!