Ezekiel's shrine is now a centre for Shi'a worship 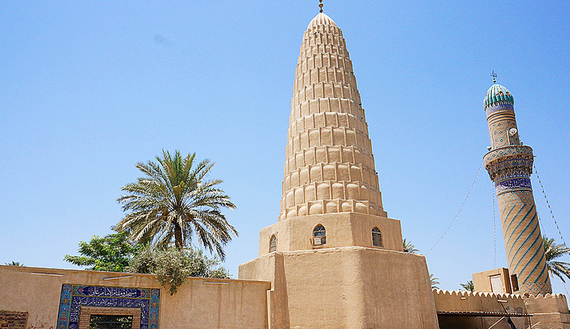 The blue Koranic inscriptions and minaret have been recently added to Ezekiel's shrine, so that its former Jewish character has been completely erased (photo: Hajj.ir)

All hopes that the dilapidated Jewish shrine of al-Kifl, where the Biblical prophet Ezekiel is reputedly buried, might be restored to its original state,  have been dashed. In spite of our petition, Point of No Return has seen photos which sadly show that the shrine looks to have been converted into a mosque and its Jewish character erased. We do not know the fate of its unique Hebrew inscriptions and floral decoration, but suspect the worst. 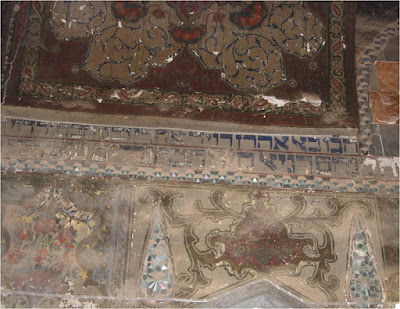 It is feared that the stunning decoration and Hebrew inscriptions have been painted over. (photo MS)


This report from 18 January 2016 by Adnan abu Zeed in Al-Monitor does not even mention that Ezekiel's tomb was an important Jewish pilgrimage site. Instead it harks back to when al-Kifl was, supposedly, a shrine to the Babylonian god Shamash, thus erasing 2,000 years of Jewish association with the shrine. To reinforce its legitimacy in Shi'a Islam, it is now claimed that 'the fourth caliph of Shi'a Islam prayed and stayed there in the 7th century'. (If ever Da'esh conquer the site, however, they would destroy it as surely as they have been doing to Christian and Shi'a sites in the north of Iraq.)

"It is traditional for visitors to frequent the historical shrine, about 60 miles south of Baghdad, and pray for God’s blessing. What is interesting about this particular place, however, is that it has not always been Islamic. The shrine once served as a temple of Shamash, the sun god, during the First Babylonian Dynasty. Based on the monotheistic principles of Islam, the shrine's prior history would ordinarily make it a symbol of idolatry and polytheism, which contradict the principle of oneness. The Arabic name “Mashhad al-Shams” means “emergence of the sun,” but otherwise, the monument lacks any traces of its Babylonian heritage. In fact, as far as many visitors know, the Hillah monument is purely Islamic.

“The monument is a rare, if not unique, case given the mixture it exemplifies between the pre- and post-Islamic eras,” Karim Saadi, a history teacher in Babil’s junior high school, told Al-Monitor. “This monument — which is about 3 kilometers [1.9 miles] away from the historic city of Babil — is not an Islamic shrine but an 'adad,' which is a Babylonian temple where spiritual rituals were conducted. While Babylonians worshiped the sun there, Muslims established a link between the temple and Islam after the fourth caliph of Islam, Ali ibn Abi Talib, prayed and stayed in it for a period of time during [mid-seventh-century] wars.” Ali, for whom Muslims also pray at the shrine, is considered by Shiites to be the rightful successor to the Prophet Muhammad.

Unlike many Iraqi monuments that today suffer from neglect and a lack of visitors, Mashhad al-Shams sits in a garden of grass and palm trees and is packed with tourists and locals praying for God’s blessing. As Babil province is majority Shiite, there are green flags throughout the site, and the entrance is lined with photos of Shiite imams and signs indicating that Ali had prayed here. Many women spend an entire day in the shrine praying, while youths might perform their noon prayers there.

After Ali al-Husseini, a college student, finished his prayers at the shrine, he spoke to Al-Monitor about its importance to him. “I am well-aware that this site is an extension of the monuments of Babil,” he said. “However, the space's sacredness, derived from the link it has with an Islamic event — the Shiite Imam Ali ibn Abi Talib’s stay there — has superseded its importance as a historic Babylonian monument.”


Read article in full:
This video by Tsur Shezaf is photographic evidence that the shrine of Ezekiel was once a Jewish shrine
More about Ezekiel's shrine
Posted by bataween at Sunday, February 14, 2016

"In just 50 years, almost a million Jews, whose communities stretch back up to 3,000 years, have been 'ethnically cleansed' from 10 Arab countries. These refugees outnumber the Palestinian refugees two to one, but their narrative has all but been ignored. Unlike Palestinian refugees, they fled not war, but systematic persecution. Seen in this light, Israel, where some 50 percent of the Jewish population descend from these refugees and are now full citizens, is the legitimate expression of the self-determination of an oppressed indigenous, Middle Eastern people."

Hogwash. Not an honest word in all that bull. And u must be a white zionist 'jew' who they would be the first to admit are using them for cheap political point scoring.

"Any reasonable person, Zionist or non-Zionist, must acknowledge that the analogy drawn between Palestinians and Mizrahi Jews is unfounded. Palestinian refugees did not want to leave Palestine. Many Palestinian communities were destroyed in 1948, and some 700,000 Palestinians were expelled, or fled, from the borders of historic Palestine. Those who left did not do so of their own volition.
In contrast, Jews from Arab lands came to this country under the initiative of the State of Israel and Jewish organizations."
Excerpt from: "Hitching a Ride on the Magic Carpet" - Haaretz
"In the absence of the European Jews [who preferred to go west], the state of Israel had to bring in Jews from Arab countries. Ben Gurion compared them with the Africans who were brought in as slaves to America."
- Israeli historian - Tom Segev, April 1998

I will not engage in an argument with you, as this entire blog tries to combat 'Jewish Nakba denial'. I suggest you educate yourself instead of spouting Arab and leftist propaganda.

well, Tom Segev said it. That leaves no room for questioning. Tom Segev would never lie or let his prejudices and passions get in the way of the quest for pure historical truth. And
it was published in Haaretz. Everything published there is true even if one statement contradicts another.
- - - - - - -

This person is an ignoramus unaware, apparently, that 100 years ago Jews in Europe were commonly considered "non-white" and in Britain, Victor Gollancz testified that up to WW2 Jews were considered "Orientals," including Ashkenazi Jews. Consider the character Svengali in the 1890s best-selling British novel, Trilby. He was depicted as a sallow-skinned, that is, swarthy, Polish Jew. Also consider the Nazi caricatures in Der Stuermer of Jews But now, for the sake of political convenience and in order to maintain the old Judeophobia in a new form Jews, are depicted as "white."

The bigot Hotz... (and/or Segev) contradicts himself but he is not strong on logic or facts.
Note:
1) "Those [Arabs] who left [Israel] did not do so of their own volition.
In contrast, Jews from Arab lands came to this country under the initiative of the State of Israel and Jewish organizations." And presumably of their own volition, whoever took the initiative, if Segev's phrase "in contrast" means anything.
2) "Ben Gurion compared them with the Africans who were brought in as slaves to America." [this quote is subject to doubt but if true, then . . .]
The Black Africans who came to the Americas, north, south, and central, including the West Indian islands, most certainly did not come of their own volition.

So what was it? Of their own volition or at the point of Zionist guns? Did Zionist commandos go to Libya or Yemen in 1949 or Algeria in 1962 to force the Jews to leave at the point of a gun? We do know that Jews in Libya suffered pogroms during the German occupation and after WW2, as well. Their departure both in the 1940s and in 1967 was the result of the fear of Arab guns. Yemenite Jews were fleeing oppression going back to the days of early Islam. In Algeria in 1962, the victorious Algerian "national liberation" front drove non-Muslims out at the point of a gun. Consider the machine guns brought to a park in a non-Muslim section of Algiers which shot at peaceful women and children there.

For the record, the first refugees in Israel's war of Independence were Jews driven out of their homes in the Shimon haTsadiq quarter of Jerusalem, in south Tel Aviv and adjacent parts of Jaffa/Yafo, and in mixed areas of Haifa in December 1947.

Moreover, as Prof Efraim Karsh has proven, the Arab Higher Committee for Palestine had irregular forces under its command that forced Arabs to evacuate localities like Haifa where combat with the Jewish forces was ongoing or was likely to take place.

The issue in this article is the deliberate erasure of the Jewish connection with the shrine of Ezekiel. In character, this is the same mindset that engages in Temple Denial (there never was a Jewish Temple in Jerusalem - thus falsifying the Gospel story for good measure) and the Jewish connection to the land of Israel altogether. It is such a fragile mindset that it cannot deal with reality and must substitute fantasy in its place. We're the West not consumed with post-modernist, post-colonial Saidian theory, these Arab claims would have long been the subject of richly deserved ridicule. Add the inherent cowardice arising from the fear of a violent Arab reaction, and you get the toleration of the absurd that we witness today.
As to the first commenter's rewrite of history, it is part and parcel of the same mindset of denial of reality. The anti-Jewish legislation that swept the Arab world, along with violence in many locations, was the primary incentive for the despoliation and destruction of the ancient Jewish communities. The Palestinian Arabs were displaced, sometimes voluntarily (as most of the so-called elite left before hostilities really got underway, others, most famously as in Haifa, were asked to stay) sometimes deliberately by the Haganna and others (mostly in strategic locations). In some villages, as in Abu Gosh, the inhabitants were left alone as they refused to join in the attack against their Jewish neighbors and that village remains to this day both Arab and prosperous on the approach to Jerusalem. So, the Palestinian Arab experience was a mixed bag rising in the context of an armed attack on the Jewish state. The experience of the Jewish communities was a legislative and local onslaught against ancient and peaceable communities as an expression of Jew-hatred. There is no legitimate basis for pretending to any moral equivalence.

It's disgusting that it could become a mosque.

What happened to the Jews that were buried there?

Like they don't have enough mosques in the world...