A historic change: cold peace with Egypt warming up

The peace treaty signed between Israel and Egypt in 1979 will for the first time be taught in Egyptian schools, The Times of Israel has quoted Israel Army Radio. This is a historic change which could lessen anti-Jewish feeling in Egypt and pave the way to genuine normalisation with Israel. (with thanks: Levana) 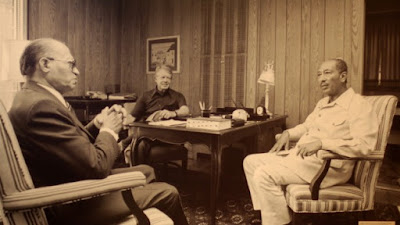 Prime Minister Menachem Begin, left, with President Jimmy Carter, centre, and President Anwar Sadat of Egypt at Camp David in September 1978. (photo credit: CC BY-SA Jeff Kubina/Flickr)
The station said a reporter had read the new schoolbook on Egypt’s modern history, which includes a chapter dealing with the Camp David agreement.
The peace deal is described in a matter-of-fact way, without bias or any attempt to present Israel in a negative light, the report said.

The authors of the Egyptian schoolbook, intended for the ninth grade, detail eight clauses from the agreement, which are reproduced in the book verbatim. These include phrases on Israel and Egypt“ending the state of war” and on “each side respecting the sovereignty and independence of the other side.”
(...) According to Army Radio, the new inclusion of the peace treaty is part of an overarching change in the contents of schoolbooks for all grades announced by the Egyptian Education Ministry two years ago. Content in some 1,300 different books was changed and in some instances the changes were decisively political, said Army Radio.

Among the changes, Hosni Mubarak’s role in the Yom Kippur War, in which he served as commander of the Egyptian air force, was marginalized when compared to its portrayal during his tenure as the country’s president. Mubarak was removed from power in the Arab Spring demonstrations of 2011, following 30 years of rule.

Additionally, some content added to books during the short presidency of the Muslim Brotherhood’s Mohammed Morsi (2012-2013) was removed. These additions preached a return to Islamic values in line with the Brotherhood’s Islamic ideology. Morsi was deposed in 2013 by then-army chief and current President Abdel-Fattah el-Sissi, and his movement was banned.