Another year, another Iranian cartoon contest denying the Holocaust has been launched, as per this Times of Israel report. While the US lifts sanctions, Iran has escaped western condemnation for its tasteless and offensive antisemitism. Will the Jewish community leader have the courage to condemn the regime, as Haroun Yeshayaei did in 2006? I'm not holding my breath. 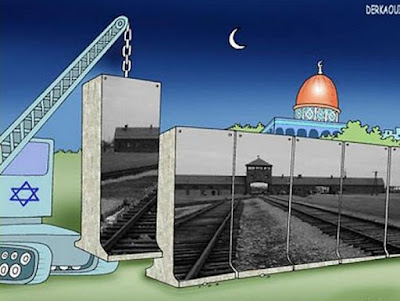 Iran plans to hold another cartoon contest focusing on Holocaust denial, and Israeli officials have called on the United Nations to condemn the event.

Knesset Speaker Yuli Edelstein on Wednesday appealed to UN Secretary General Ban Ki-moon to denounce the 11th Tehran International Cartoon Biennial.
In a letter to Ban, Edelstein said that “words cannot describe the revulsion and protestation of the state of Israel and many across the world at the recurring proof that Iran continues in its policy of Holocaust denial.”

The winner of the event sponsored by the Tehran municipality will receive a $50,000 cash prize.

Organizers say the competition is designed to highlight the world’s double standard in defending caricatures of the Muslim prophet Mohammed, whose depiction is forbidden in Islam.

The competition scheduled for June 2016 is expected to draw submissions from artists from some 50 countries, Iran’s semi-official IRNA news agency reported in December.

Read article in full
Posted by bataween at Tuesday, January 19, 2016