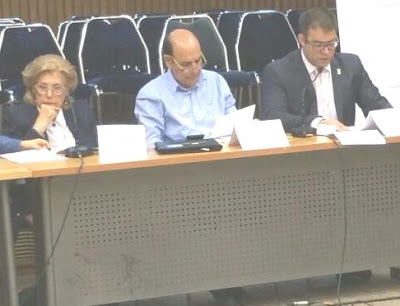 Levana Zamir, head of the organisations of Jews from Arab countries in Israel, and Avi Nahmani,  director of the lobby for the recovery of stolen property from Arab lands, listen while  MK Oren Hazan (right) reads out the draft Convention.

Israel is reported to be in secret talks with Arab governments to agree on an international fund to compensate  losses sustained by both Jews and Palestinian refugees.

According to Likud MK Micky Zohar, talks have been taking place with the Egyptian government and with the full knowledge and support of the Israeli  Prime Minister Benjamin Netanyahu.

MK Micky Zohar, together with Likud MK Oren Hazan, co-chaired a meeting of the Knesset lobby for the recovery of stolen Jewish properties from Arab lands  on 15 December to finalise a Convention proposing the establishment of an International Fund. This concept, first proposed by US president Clinton in 2000, will compensate both Jewish refugees from Arab lands and individual Palestinian refugees for their losses.

The lobby will work together with the government and Knesset to get the fund set up. It considers the International Fund a 'tool for peace' because it is thought that compensation will lead the Palestinians to drop their 'right of return'.

Barring  a few amendments, the Convention will form the basis for a bill to be proposed in the Knesset. In 2010, the Knesset passed a law stipulating that no peace treaty could be signed without compensation for Jewish refugees being on the agenda.

As the numbers of  Jewish refugees still living are fast diminishing, the Convention will also propose a law to enable descendants of refugees to qualify for compensation.

The lobby undertakes to push for a renewed campaign to register property claims. It will also do its utmost to publicise the 'Jewish Nakba' and establish a museum dedicated to the history of Jews driven from the Middle East and North Africa.

For a copy of the text of the Draft Convention (Hebrew), please email bataween@gmail.com
Posted by bataween at Thursday, December 17, 2015

How can you register for this?