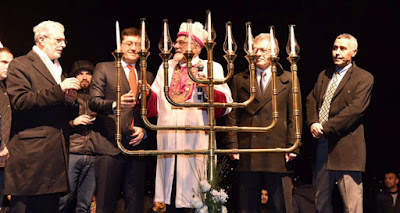 For the first time in the history of modern Turkey, a public Hanucah lighting ceremony was held in Istanbul. Whether they take place in Washington DC, Bahrain or Berlin, these ceremonies are a good PR exercise by which governments reassure their Jewish minorities and show off a shared culture. The Turkish ceremony comes at a time when the Jewish community is dwindling - thousands are applying for Spanish passports. Predictably, the authorities  are denying that the Jews of Turkey are suffering anti-semitic pressure from the state.

The Times of Israel reports:
The event was organized by the municipality, and attended by the Turkish chief rabbi and members of the Jewish community, according to Turkey’s Jewish Şalom newspaper.

Government representatives were also present at the candle-lighting, which coincided with the eighth and final night of the Jewish Festival of Lights.
A video of the ceremony, held outside the scenic Ortakoy Mosque on the European side of the Bosphorus, showed the eight-branched candelabra set to be lit as the Muslim call to pray rang out. Pictures from the event posted on social media showed Turkish girls in headscarves standing beside the Jewish holiday lamp.


Last week, in a Hanukkah message, Turkish President Recep Tayyip Erdogan said “our Jewish citizens are an indispensable part of our society.”
“With these thoughts I wish peace, happiness and well-being to all Jews on the occasion of Hanukkah,” Erdogan said on December 7, according to the Hurriyet Daily News.

The Daily Sabah reports:
Turkey's Jewry usually state that they do not suffer from any kind of segregation or discrimination in the country. The community rejects allegations in news sources or dailies that the Turkish state promotes anti-Semitism in the country with "many Jews deciding to go to Spain where a law of return is presently being legislated."