Point of No Return is distressed to learn of the passing of Suzy Vidal (Sultana Latifa) in Belgium. Suzy was a regular commenter on Point of No Return until poor eysight and general ill-health forced her to stop contributing her pithy observations. Suzy had something to say about almost everything. She had a hard life after her uprooting from Egypt but always retained a quirky sense of humour. She wrote a trilogy, The Jasmine necklace, recording her memoirs of her early life in Cairo, vignettes, popular proverbs, customs and expressions. In her memory PoNR is re-posting Lyn Julius's review of the Jasmine Necklace: 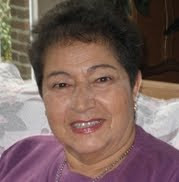 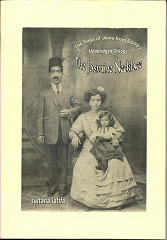 If you want to know why Egyptian women had beautiful and healthy hair, Suzy Vidal will give away their secret: castor oil! For congested eyes and sties, follow Suzy’s grandmother’s remedy: apply a child’s urine on closed lids. The Jasmine necklace does not always come up smelling of roses – there are lice, cockroaches and warts aplenty. But the book also features traditions, recipes, a catalogue of picturesque Arabic words and expressions and untold other clues to this colourful, quirky but vanished world.

The author Suzy aka Sultana has two names because her headstrong mother refused to name her after her mother-in-law Sultana, as was the custom. Suzy was brought up on the fourth floor of a Cairo hotel because the family could not afford to rent a downtown apartment. Nevertheless the Extadey Hotel was a paradise for children, and Suzy sketches vivid portraits of the family’s neighbours and friends. The hotel’s permanent guests reflected the cosmopolitan and multilingual make-up of Egypt before the war – with its Armenians, Jews and Greeks. During World War 2 the US army requisitioned part of the hotel, but indulged the residents with sweets and treats.

With the stormclouds gathering over Egypt’s Jewish community, it is interesting that Suzy’s family – Italian passport–holders with no Italian   - were subject to the same harassment and pressure as other Jews. While they were not expelled overnight like French and British nationals, the Vidals received no assistance from the Italian consulate. When the time came to leave in 1957, the family managed to smuggle out Suzy’s mother’s jewellery in a Player’s cigarette packet, but their capital disappeared with a dishonest ‘passeur’.

“ Only mountains don’t meet.” This saying repeated in Suzy Vidal’s book expresses the hope that  her large family – scattered to the four corners of the earth -  would once again come together after their uprooting from Egypt. But life was a slog and money tight for the refugees, now in Israel, Australia, Brazil and Italy. The close-knit community they had known in Cairo had gone forever. Some never recovered from the shock – Suzy’s parents both died in penury in their 50s.

A graduate of the American University in Cairo, Suzy had to abandon her dreams of becoming a university professor in order to become a shorthand typist. Their exile in Italy was a series of bitter experiences and disappointments as the family struggled to make ends meet. But this book is a fitting tribute to Suzy’s family and community, and a lasting reminder of their roots to the next generation.

Suzy's story for the weekend

Something light for Tisha B'Ab


Suzy's blog is at http://sultanalatifasblog.blogspot.co.uk/
Posted by bataween at Wednesday, December 02, 2015

Sad news indeed. May her memory always be a blessing.

the world is a little sadder place.

Blessed is the True Judge

Sad to hear. I wondered where she had got to. Condolences to her family

Susy's wrote short comments but full of meaning and punch.
Will miss her postings.

She was also extremely rude and quite vulgar if you ever dared point out that her comments had inconsistencies and backed them up with historical facts. Not a pleasant person!

The only memory I have of her are unladylike insults because I found several errors in her comments.

I politely gave her historical facts to back these up.

Instead of thanking me and correcting her quite flagrant errors she made an utter fool of herself by aiming swear words at me although she did not even know who I was.