Yemen's Jews need help to get out

"It's just a slogan, we don't mean it literally." The Yemeni authorities have dismissed the cry 'death to the Jews' as rhetoric. However, the latest threat," convert to Islam, or leave!" is being taken seriously by Druze MK Ayoub Kara. Today he went to see Prime Minister Netanyahu to discuss what might be done to save the few Jews remaining in the war-torn country. Informative article in the Washington Post. 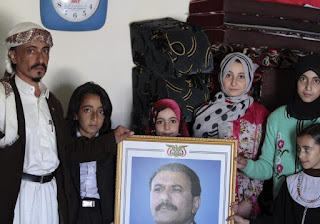 Chief rabbi of the Jews in Yemen Yahya Yosef Mosa with his family carries a picture of the ousted president of Yemen Ali Abdullah Saleh in in his home in Sanaa. (photo :REUTERS)

"We need to act fast to get them out and we will do that, God willing,” Ayoub Kara, a Druze lawmaker with the right-wing Likud party, told the Jerusalem Post. Kara says that he had been contacted by a Yemenite Jew who had escaped the country by pretending to be a Muslim.

Yemen is in the midst of a civil war that the United Nations says has killed over 2,300 over six months. The capital of Sanaa is currently held by a group called the Houthis, a Shiite rebel group that originated from northwestern Yemen's Saada province and toppled the U.S.-backed government earlier this year. Since May, the Houthis have faced a Saudi-led coalition that supports exiled President Abed Rabbo Mansour Hadi.

Inspired by Iran, the regional Shiite power accused of backing the Houthi rebels, the Yemeni group have used anti-Semitism as a rallying cry for over a decade. “Death to America, death to Israel, damnation to the Jews," goes a slogan widely used by the Houthis, though the Houthis themselves have suggested that no one should worry about it.

Earlier this year, the New York Times' Rod Nordland said that when he talked to a Houthi leader, he was told it was "just a slogan, we don't mean it literally." Houthi authorities have said that their problem is with Israel, not with the Jews who live in Yemen.

Yemen's Jewish community have a history in southern Arabia that stretches back to the time of King Solomon. After the rise of Islam, they appeared to have a tenuous though mostly peaceful relationship with their Muslim neighbors, though there were periods of violence and pogroms. Following the creation of Israel in 1948 there were anti-Semitic riots in the southern Yemen port of Aden. Over the next few years, British and American planes transported tens of thousands of Jews out of the country for a new life in Yemen: The mission was nicknamed Operation Magic Carpet ride.

In the years that followed, many other Jews left the country, fleeing not only persecution but also the chaos and fighting that flared up in the country. According to Charles Schmitz, a professor of geography at Towson University and an expert on Yemen, most of the Jews that remained in the country lived in the far north, near the Houthis traditional power base, without too much friction. However, as the conflict in Yemen intensified over the past 15 years, the Houthis developed a "rigid religious ideology," Schmitz explains.

As The Post's Sudarsan Raghavan wrote in 2009, when the Houthi rebels began their fight against the government in the early 2000s, they would often target Jewish property. In 2007, the Jewish community in Saada say they were sent an ultimatum:  "You should leave the area, or we will kidnap you and slaughter you," is how one rabbi described it. A number of members of the Jewish community were killed. Ali Abdullah Saleh, then the president of Yemen, stepped in to help the Jews in Yemen's north, relocating them at government expense to a gated community known as Tourist City near Sanaa.

When Saleh was toppled from power in 2012, some Jews expressed fears for their future. "He ran Yemen like a fiefdom, he neglected people and stole natural resources, but as a Jew my family and I were protected by him," Suleiman Habib, one of the small number of Jews remaining in Tourist City, told Time Magazine. Saleh does still remains a powerful force in Yemen. However, in the chaotic Yemen of 2015, he has found himself allied with the Houthis: He himself comes from the same Zaydi Shiite sect that forms a key part of the Houthi identity. A spokesperson for Saleh's office told the Jerusalem Post that Kara's concerns about Yemen's Jews were unfounded.