While PM Netanyahu may have exaggerated the role of the Mufti in Hitler's decision to extend the Holocaust's reach,  in CrethiPlethi Rob Harris argues that the Mufti  played  a decisive role in ensuring that extermination trumped expulsion by rendering the only possible haven for European Jews -  Palestine -  firmly out of bounds. There is no doubt that had the Nazis won the war, the Mufti would have ensured that not only the Jews of Palestine, but throughout the Arab world, would have been exterminated. (With thanks: Frank) 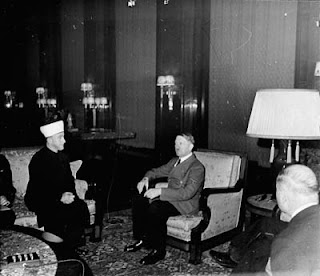 The book ‘Nazis, Islamists, and the Making of the Modern Middle East’, authored by Wolfgang G. Schwanitz and Barry Rubin, points to Hitler being open to emigration as a solution to the “Jewish Question” in 1941. The book vividly illustrates (see pages 20–22) the influence that the Mufti brought to bear in helping initiate a mass extermination programme, albeit a contention that is controversial amongst other historians:


“Hitler had to decide precisely how “the very last” of the Jews were to leave Germany. As late as 1941, Hitler thought this could happen, in the words of Hermann Göring in July, by “emigration or evacuation.” Yet since other countries refused to take many or any Jewish refugees, Palestine was the only possible refuge, as designated by the League of Nations in 1922. If that last safe haven was closed, mass murder would be Hitler’s only alternative.

The importance of the Arab-Muslim alliance for Berlin, along with the grand mufti’s urging, ensured that outcome. And al-Husaini would be present at the critical moment Hitler chose it. In November 1941, al-Husaini arrived in Berlin to a reception showing the Germans saw him as future leader of all Arabs and Muslims, perhaps even reviver of the Islamic caliphate. […]

When the day of German victory came, Hitler continued, Germany would announce the Arabs’ liberation. The grand mufti would become leader of most Arabs. All Jews in the Middle East would be killed. […]

A few hours after seeing the grand mufti Hitler ordered invitations sent for a conference to be held at a villa on Lake Wannsee. The meeting’s purpose was to plan the comprehensive extermination of all Europe’s Jews.”

While it is arguable to suggest that Netanyahu may have exaggerated the role of al-Husseini in Hitler’s decision to extend the Holocaust programme’s reach, it nonetheless appears to be correct to claim that the Mufti had a significant influence on the Reich when it came to migration policy, an influence, which would extend to the establishment of a Bosnian-Muslim Waffen SS division in 1943, and plans to institute a Jewish extermination programme in Palestine, which were prevented by Rommel’s defeat by the British at El Alamein, as attested in the book ‘Nazi Palestine: The Plans for the Extermination of the Jews of Palestine’, by Klaus-Michael Mallmann and Martin Cüppers.


“Arise. O sons of Arabia, fight for your sacred rights. Kill the Jews wherever you find them. Their spilled blood pleases Allah, our history and religion. That will save our honor.” — Haj Amin al-Husseini, radio broadcast, May 1942.

Al-Husseini may not have merely encouraged an extermination programme — there is less historical debate in the fact that he collaborated in efforts to implement such policy, and systematically promoted the NAZI cause in the Arab world. Perhaps this week’s argument will encourage some renewed interest in this issue, which has been ignored all too often.


“…The sole German objective in the region will be to liquidate all Jews who live in Arab countries under the patronage of Great Britain.” — Adolf Hitler to Hajj Amin al-Husseini, November 28, 1941.