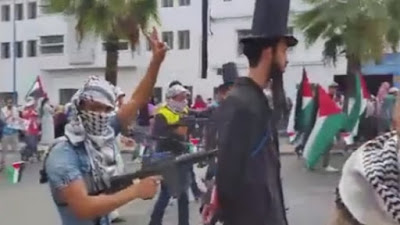 A still image from a video of a pro-Palestinian demonstration in Casablanca, Morocco, in which 'Jews' are held at gunpoint by keffiyeh-clad protesters, October 25, 2015. (screen capture: alyaexpress-news.com)

This MEMRI video clip is of a pro-Palestinian demonstration in the Moroccan city of Casablanca. It featured men dressed as Orthodox Jews who were being led at gunpoint by masked men wearing keffiyehs. The demonstration was shocking in its blatant antisemitism. Report by The Jerusalem Post:

The demonstration was held Sunday with permission from local police, according to a report which appeared Sunday on the news website alyaexpress-news.com. It also featured a video of the event, which drew many thousands of participants.

In the video, two men wearing keffiyehs, or Arab headdresses that are popular with Palestinian rioters and militants, are seen toting what appear to be toy rifles behind two bearded men wearing black robes and top hats during a march that also featured Palestinian flags, including a very large one carried by dozens of people, and a model of al-Aksa mosque located on the Temple Mount in Jerusalem.

Expressions of anti-Semitism are relatively rare in Morocco, whose king and government have invested millions of dollars in recent years in restoring Jewish heritage sites. In February, the restoration project was honored at an event in Paris attended by French Prime Minister Manuel Valls.

Read article in full
Posted by bataween at Tuesday, October 27, 2015