Jewish musings at the tomb of Nahum

An Israeli visiting the tomb of the prophet Nahum at al-Qosh muses widely about Iraq's Jewish history, the plight of the Assyrian Christians in the vicinity  and whether the suffering of Iraq's peoples will come to an end. Never give in to despair, Yael Mizrahi Arnaud concludes in International Policy Digest: 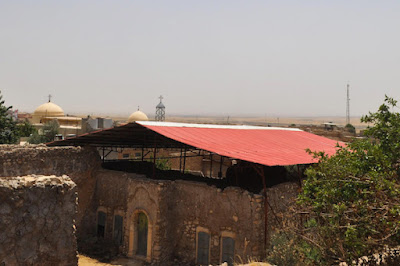 A new roof protects the tomb of Nahum from the elements (photo: Yael Mizrahi)

To the Jews, the land between the Jordan River and the Mediterranean Sea is holiest; yet due to repeated exiles at the hands of conquering empires, Jews became known as “a people without a land.” Jews adjusted to this reality in these very hills—‘beyond the river’ or ever ha nahar, the biblical Hebrew term that denotes the region along the Euphrates, modern-day Iraq. After being expelled from Jerusalem, following the fall of the second temple in 70 AD, Babylon would become the spiritual, religious, and cultural epicenter of Judaism for more than a thousand years to come.

Despite the perennial longing for Jerusalem, Jewish life flourished here. Babylonian academics outshone their Galilean counterparts, evident in the emphasis placed on the Babylonian Talmudic texts. It is here that the Jewish Oral Law, torah she ba’al peh, passed down throughout generations—the laws were not merely codified, but the inhabitants of these cities were entrenched in lively and contentious debate. Conversations from 450 CE that we are still engaging in today originate from these cities– Pumbdedita (current day Fallujah), Sura, Nehardea—they housed the great Yeshivas that gave rise to the Bablyonian Talmud.

“Nahum,” in Hebrew, means comfort, and while reading his prophesy during my ride to the village, I searched for consolation in his words. For my own sanity, for the belief that one-day the Iraqi people will find comfort themselves. Nevertheless, my optimism is tested in this place. When you’re able to put face to face with the ugliest manifestations of what humanity is capable of; how life is cheap. It has now become impossible to find an Iraqi family that hasn’t been affected by the violence. The international media barely reports on the continued loss of Iraqi life; attacks which are weekly occurrences, and have been for the past 10 years.

Read article in full
Posted by bataween at Sunday, October 18, 2015