The last thing Sandy Rashty expected was to be presented with the Young Journalist of the Year Award by an Asian media group. Sandy, who works for the UK Jewish Chronicle, has written about the cultural complexities of being the British-born daughter of Iraqi Jews forced to leave homes, businesses and personal possessions in 1970. Mazaltob Sandy! 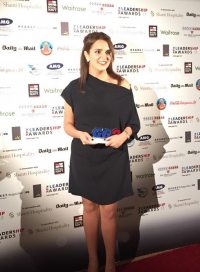 We’ve all seen it before.

People win an award, walk up to the stage, say then never expected such a thing to ever happen – and then proceed to whip out a neat set of pre-prepared ‘thank you ever so much’ notes.

Last night, I was presented with the Young Journalist of the Year Award at the GG2 annual awards ceremony – an event that recognises the contributions of ethnic minorities to Britain.

Truly, I never expected to win.

I never expected an event sponsored by an Asian media group to recognise the contributions of a Jewish journalist. Why should they?

Nevertheless, shortlisted for the award, I happily attended the ceremony – bringing my bouncy mother along for good measure.

After all, it was down to her that I’d been shortlisted.

Ever since I joined the JC, I have written about the cultural complexities that come with being the British-born daughter of Iraqi Jewish parents – people who had been forced to flee Baghdad in the 1970s in the wake of increasing antisemitism and persecution.

I have told the untold story of my grandfather who was imprisoned by Saddam Hussein’s government for being a “Zionist spy” (just FYI, he wasn’t). I have told the story of my family, who were forced to leave their businesses, homes and most personal possessions behind in a bid to make a safe escape in the dark of the night through Kurdistan, Iran and Turkey – before seeking refuge in Israel or any European country that would have them.

I have performed impersonations of my distinctly Middle Eastern family – who sing Rosh Hashana and Chanucah songs in Arabic.

It’s a background alien to most – which is why I felt I had little chance of winning.

Read article in full
Posted by bataween at Friday, October 30, 2015